This will be the first time that the Euros will be played across Europe and will be a one-off event to celebrate the 60th "birthday" of the European Championship competition. Wembley Stadium in London will hosts the semi-finals and finals for the second time ever as the tournament is set to be played across 11 countries. This will also be the first time VAR will be introduced. 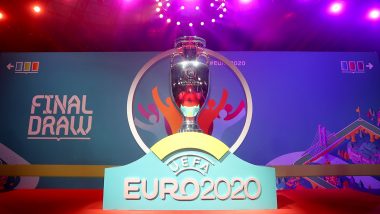 After being deferred by a year amid the coronavirus pandemic, Euro 2020 will kick off from June 11 onwards. This is the 60th edition of the European championships and will be played across 11 cities across Europe. The competition was originally planned to be played from 12 June to 12 July 2020 but was postponed and rescheduled for 11 June to 11 July 2021. Meanwhile, fans searching for EURO 2020 fixtures, full schedule, venue and match timings can scroll down below. EURO 2020 Schedule PDF For Free.

Defending champions Portugal are drawn in Group F along with the likes of France and Germany. 2012 champions Spain are placed in Group E while Qualifying perfectionists Italy find themselves in Group A. Belgium (Group B), Netherlands (Group C), England (Group D) are some of the high-profile teams in other groups.

(The above story first appeared on LatestLY on Jun 01, 2021 11:58 PM IST. For more news and updates on politics, world, sports, entertainment and lifestyle, log on to our website latestly.com).