Juan Ferrando would be up against his former side as the Mariners aim to extend their unbeaten run and continue their good form ahead of the playoffs. FC Goa on the other hand, need to win this game at all costs and keep alive their hopes of a top-four finish. 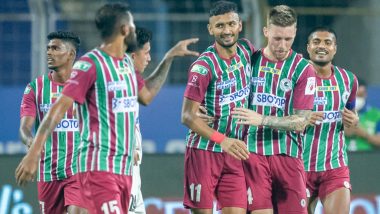 ATK Mohun Bagan would aim at continuing their good form ahead of the playoffs when they face FC Goa in the Indian Super League 2021-22. The Mariners have so far had a pretty decent run under Juan Ferrando as the Spaniard gets set to take on his former side in the competition. The match would be played at the GMC Athletic Stadium in Bambolim and has a start time of 7:30 pm IST (Indian Standard Time). ATK Mohun Bagan defeated NorthEast United FC in a thrilling clash and they would be full of confidence heading into this one. A victory in this game would ensure that they have the same points as league toppers Hyderabad FC. Indian Super League Points Table 2021–22 Updated.

For FC Goa though, the story is different. Placed ninth after 16 games, they need a victory in this game if they plan on keeping alive their hopes of a finish within the top four. Having drubbed Chennaiyin 5-0 in their previous match, fans would expect them to go all out against ATK Mohun Bagan but the latter have a strong lineup and one, that cannot be defeated easily. Let us take a look at the live streaming details of the game.

The FC Goa vs ATK Mohun Bagan match in ISL 2021-22 will be played at the GMC Athletic Stadium in Bambolim. The match will take place on February 15, 2022 (Tuesday) and it is scheduled to begin at 07:30 pm IST (Indian Standard Time).

Fans can also watch FC Goa vs ATK Mohun Bagan match online. Since Star Sports network is the official broadcaster of ISL 2021-22, Disney+Hotstar will be live streaming the FCG vs ATKMB clash online for fans. JIO and Airtel subscribers can also follow the match on JIO TV and XStream.

(The above story first appeared on LatestLY on Feb 15, 2022 04:58 PM IST. For more news and updates on politics, world, sports, entertainment and lifestyle, log on to our website latestly.com).