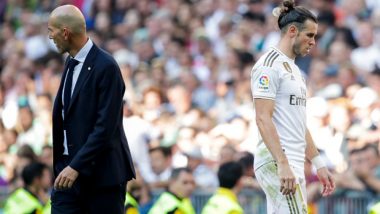 For a while now there have been reports of Gareth Bale having a rough relationship with Zinedine Zidane. The Real Madrid manager last year was of the opinion that Bale needs to leave the Los Blancos club as soon as possible as this would be right for everyone. However, Bale is still at the club and his manager is repeatedly has been clarifying that he is happy at the club. But as per a report by ESPN, Bale’s relationship with Zidane has hit an all-time low. The report further states that the spat has gone personal. When it comes to work, Zidane has no issues. Gareth Bale Transfer News Update: Real Madrid Star Expresses Interest on Future Stint in MLS Amid Speculations of Him Leaving Los Blancos.

But Bale’s reaction on being benched had irked the club coaches. His injuries have not helped the cause either. If one may recall, Bale has featured in only 13 games this season which also includes the Champions League. Ever since the La Liga has been restarted he has been an unused sub twice which is proving to be quite expensive for the Los Blancos.

Last year Zidane during an interview said that he hopes that Bale leaves the club soon. While explaining that he has no personal issues with the 30-year-old, Real Madrid manager said, "I have nothing personal against him, but there comes a time where things are done because they must be done, I have to make decisions. We have to change." Only time will tell about the Welsh footballer's fate at the club but if the reports are true, we are sure that in the next few days we might hear about Bale's transfer rumours.

(The above story first appeared on LatestLY on Jun 29, 2020 02:01 PM IST. For more news and updates on politics, world, sports, entertainment and lifestyle, log on to our website latestly.com).