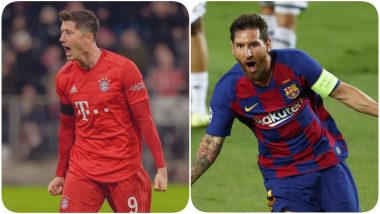 It’s a clash of Titans in the Champions League 2019-20 quarter-finals. Lionel Messi’s Barcelona is all set to take on Bayern Munich on August 14, 2020. Barcelona is all set to face their tough opponent in the season so far.  In this article, we shall bring to you the live streaming of Barcelona vs Bayern Munich. The mouthwatering clash is all set to happen at the Estádio Sport Lisboa e Benfica in Portugal. All eyes will be on the captain of Barcelona Lionel Messi and Robert Lewandowski from Bayern Munich as both the players have played a vital role for their respective teams to get through the quarter-finals. The six-time Ballon d’Or winner led the team to a 3-1 win against Napoli in the quarter-finals of the League and became the only footballer to have 27 goals in the Round of 16. The Bundesliga 2019-20 winner went on to defeat Chelsea by 4-1. They won by an aggregate of 7-1. Barcelona vs Bayern Munich, UEFA Champions League 2019–20: Lionel Messi, Robert Lewandowski and Other Players to Watch Out in BAR vs BAY UCL Quarter-Final Match.

The Catalan side won the on the aggregate of 6-2 to face the German giants. However, Lionel Messi’s injury could be a concern for the Catalan side, but Quique Setien has assured that the Argentine is fine. However, Messi continued to stay on the sidelines of the training camp of Barcelona. Talking about Munich’s Robert Lewandowski, who has enjoyed a gala time in the Bundesliga 2019-20, netted a couple of goals in the second leg of Champions League 2019-20. Lewandowski scored 53 goals in 34 Bundesliga appearances as opposed to Lionel Messi who had scored 31 goals and added 27 assists across all competitions. The German accounts for 54 per cent of his team goals whereas the six-time Ballon d’Or winner is responsible for 53 per cent of Barcelona's nets.

Barcelona vs Bayern Munich match in UEFA Champions League 2019-20 will take place on August 14, 2020 (Friday midnight). The match will be played at the Estádio Sport Lisboa e Benfica in Portugal as mentioned above. It is scheduled to start at 12:30 am IST (Indian Standard Time).

Fans in India can catch the live action of Barcelona vs Bayern Munich match on Sony Sports channels. Sony Pictures Sports Network (SPSN) is the official broadcaster of UEFA Champions League 2019-20 in India. Fans need to tune into Sony Ten channels to live telecast the round of eight match on their television sets. Those looking for online options can also catch live action on online platforms. SonyLiv will be live streaming the game online for its fans in India. Lionel Messi and Robert Lewandowski fans can watch it live on the SonyLiv app or on the website.

The winners of the match would seal their berth in the final four. It would be quite interesting to see who between the two stalwarts walks away with the game. Do let us know about your thoughts on the match

(The above story first appeared on LatestLY on Aug 14, 2020 11:35 PM IST. For more news and updates on politics, world, sports, entertainment and lifestyle, log on to our website latestly.com).