FC Goa and Mumbai City FC will search for their first win of ISL 2020-21 when they clash against each other at the Fatorda Stadium. Goa fought back from two goals down to hold Bengaluru FC to a 2-2 draw and steal a point while Mumbai City FC were beaten by NorthEast United in the first game. Mumbai will be without midfielder Ahmed Jahouh. 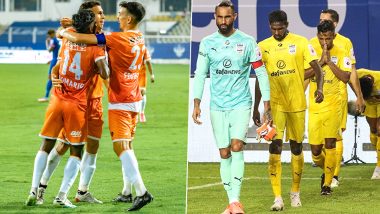 Mumbai City and FC Goa will chase their maiden win in Indian Super League (ISL) season 7 when they clash against each other in match 6 of ISL 2020-21. Both sides failed to win their first match of the season but while FC Goa fought back from two goals behind to hold Bengaluru FC to a 2-2 draw and snatch a point, Mumbai City FC were shocked by NorthEast United and fell to a 0-1 loss. Apart from a win though, both teams will have a lot more to look forward to in this clash. Meanwhile, fans searching for how and where to watch the FC Goa vs Mumbai City FC match of ISL 202021 should scroll down for all details. FCG vs MCFC Head-to-Head Record: Ahead of ISL 2020-21 Clash, Here Are Match Results of FC Goa vs Mumbai City FC Encounters in Indian Super League.

FC Goa showed great resilience and defensive composure in their fightback against Bengaluru FC. Their substitutions were spot on and turned around the game for them. That, as it was pointed by many, was missing for Goa under Sergio Lobera who switched to Mumbai City FC this season. Lobera also took a number of Goa’s players with him and Hugo Boumous, Ahmed Jahouh and Mourtada Fall are among the crucial ones. Jahouh though is suspended after seeing a straight red against NorthEast while Boumous had a quiet game and Fall was an unused substitute. FCG vs MCFC Dream11 Team Prediction in ISL 2020–21: Tips to Pick Goalkeeper, Defenders, Midfielders and Forwards for FC Goa vs Mumbai City FC in Indian Super League 7 Football Match.

FC Goa vs Mumbai City FC ISL 2020-21 match will be played on November 25 (Wednesday). The match will be held at the Fatorda Stadium in Margao and it is scheduled to start at 07:30 pm IST (Indian Standard Time).

(The above story first appeared on LatestLY on Nov 25, 2020 06:38 PM IST. For more news and updates on politics, world, sports, entertainment and lifestyle, log on to our website latestly.com).