Russia will be looking to stay alive in the Euro 2020 championship when it takes on Finland in a Group B game. The Russians were thumped 0-3 by Belgium in their opening match courtesy some poor defensive work as they had a day to forget. A win for Finland this evening would surely confirm a place in the next round. 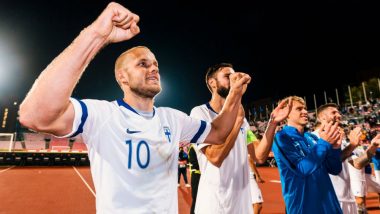 Russia will be looking to stay alive in the Euro 2020 championship when it takes on Finland in a Group B game. The Russians were thumped 0-3 by Belgium in their opening match courtesy of some poor defensive work as they had a day to forget. Opponents Finland had a day to forget too in their opener but all because of non-footballing reasons with the whole Christian Eriksen health scare. A win for Finland this evening would surely confirm a place in the next round and they will be eager to grab this opportunity. Euro 2020 Day 6 Schedule: Today's Match With Kick-Off Time in IST, Upcoming Fixtures.

Nikolai Alho has resumed first-team training with the Finland team and that should give the squad a big boost ahead of the game. Teemu Pukki and Joel Pohjanpalo looked descent against Denmark with their movement in the final third and the partnership looks set to continue. Joon Toivio has been struggling with a sore toe but is expected to start in a three-man defensive unit. Finland will likely go for a 3-5-2 formation and try and hit Russia on the break. UEFA Euro 2020 Points Table Updated.

Yuri Zhirkov, one of the long-standing servants of Russian football, has been ruled out of the tournament through injury. Andrei Semyonov and Georgi Dzhikiya were troubled by the Belgian attack in the last match and Russia needs a composed from the duo against Finland. Artem Dyzuba needs the support of his midfield to carve out chances else the skipper could cut a frustrated figure yet again.

The Group B clash of Euro 2020 between Finland and Russia will be played at the Krestovsky Stadium in St Peterburg on June 16, 2021 (Wednesday). The match has a scheduled time of 05:30 pm IST (Indian Standard Time).

Sony Network are the official broadcasters of UEFA Euro 2020 and will telecast Finland vs Russia match. Fans can tune into Sony Ten 2 to catch the English commentary while Sony Six, Sony Ten 3 will broadcast the game in regional languages on TV. Those unable to watch the telecast can turn to online platforms, SonyLiv will provide France vs Germany live online streaming in its app and website while Jio TV and FanCode will also stream the game.

Russia have won all of the previous meetings versus Finland and it will be interesting to see how they perform under pressure. The two teams will likely cancel each other out in their latest meeting.

(The above story first appeared on LatestLY on Jun 16, 2021 06:17 PM IST. For more news and updates on politics, world, sports, entertainment and lifestyle, log on to our website latestly.com).