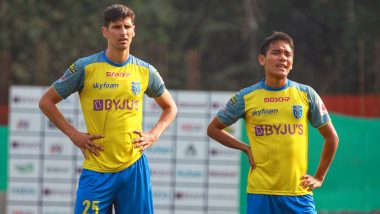 Odisha FC and Kerala Blasters face-off in the next Indian Super League (ISL) fixture. Odisha FC vs Kerala Blasters FC match in ISL 2020-21 will be played at the Fatorda Stadium on February 11 (Thursday). Both sides are fighting to avoid the tablespoon with chances of making the ISL playoffs almost over. Odisha FC are at the bottom of the league table with only eight points from 15 matches while Kerala Blasters are a position above with 15 points from a game more. Meanwhile, fans in India searching for how and where to watch the live telecast, live streaming online and other match details for the OFC vs KBFC match should scroll down for all relevant information. OFC vs KBFC Dream11 Team Prediction in ISL 2020–21: Tips To Pick Goalkeeper, Defenders, Midfielders and Forwards for Odisha FC vs Kerala Blasters FC in Indian Super League 7 Football Match.

When both these teams met earlier in the competition, Odisha FC ran-out 4-2 winners. That, unfortunately, remains Odisha FC’s only victory in the ISL this season. Kerala Blasters have won three matches. But both these sides enter this clash on the back of long winless runs in the league. Odisha FC are winless in their last six while Kerala Blasters have lost and drawn two each in their last four.

Odisha FC vs Kerala Blasters match in ISL 2020-21 will be played at the Fatorda Stadium in Margao. The game will be held on February 11 (Thursday) and it has a scheduled start time of 07:30 pm IST (Indian Standard Time).

Fans in India can watch the live telecast of Odisha FC vs Kerala Blasters FC match on Star Sports channels. Star Sports is the official broadcaster for Indian Super League (ISL) 2020-21 in India. Fans can tune into Star Sports 2, Star Sports Hindi, Star Sports 2 HD and Star Sports Hindi HD channels to catch the live-action of the OFC vs KBFC match. Those fans not able to follow the clash live on television can enjoy the game live online on Disney+Hotstar, which will be live-streaming match online for fans.

(The above story first appeared on LatestLY on Feb 11, 2021 05:18 PM IST. For more news and updates on politics, world, sports, entertainment and lifestyle, log on to our website latestly.com).