Inter Milan vs Torino, Serie A 2019-20: Lautaro Martinez, Andrea Belotti and Other Players to Watch Out in INT vs TOR Football Match 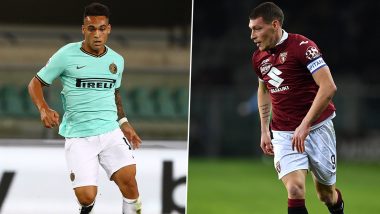 Inter Milan will take on Torino in the latest round of Serie A 2019-20 fixtures. The clash will be played at the San Siro Stadium on July 13, 2020 (late Monday night). Antonio Conte’s men still have an outside chance of their first domestic league title since the 2009-10 season but first need to get past the Turin club, who themselves are in good form coming into this game. Inter Milan vs Torino, Serie A 2019–20 Free Live Streaming Online & Match Time in Indian Time.

Inter Milan’s brilliant start post lockdown has been halted in the past two games as they suffered a defeat against Bologna and drew with Hellas Verona. This has put Antonio Conte’s men 11 points behind leaders Juventus, however, a win today will help them gather momentum for the remainder of the season. INT vs TOR Dream11 Prediction in Serie A 2019–20.

Meanwhile, Torino who were in danger of getting relegated, have pulled themselves away from the drop zone after putting in a decent run of results. The Turin club has lost three of their last six games in the league and two of them came against Lazio and Juventus. Moreno Longo’s men have the odds stacked against them but will be looking for a victory to increase their chances of survival.

Lautaro Martinez has been brilliant this season for Inter Milan but hasn’t found the back of the net since the game against Sampdoria. The Argentine is on a five-game goal drought and will be hoping to end that in tonight’s game

The Torino captain is the main reason behind the club stellar run which has seen them move away from the relegation zone. Belotti has scored in five games on the trot which has taken his tally for the season to 14 goals in the League. The 26-year-old will once again look to get on the score sheet and continue his run.

The Chilean has been mostly on the fringes of the Inter Milan team due to injury and lack of form but has found game time in recent weeks. He scored his second league goal against Brescia earlier in the month and is expected to start tonight. The Chilean will be looking to add to his tally and guide his team to a win.

The Danish midfielder joined Inter Milan in January and has been an influential figure in the team but has struggled to get among the goals. He has scored just once this season, so this will be a good opportunity for him to double his league tally for the season. His creativity will be important for Inter if they are to break down Torino.

(The above story first appeared on LatestLY on Jul 13, 2020 11:48 PM IST. For more news and updates on politics, world, sports, entertainment and lifestyle, log on to our website latestly.com).