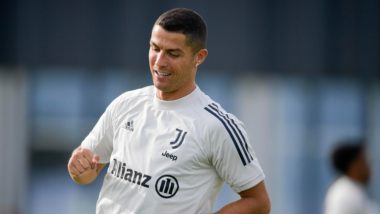 In an Instagram live on Friday, Cristiano Ronaldo had clarified that he has not breached any COVID-19 protocol.  The Juventus star was accused by the Italian Sports Minster Vincenzo Spadafora of breaching the norms after travelling from Portugal to Turin in an air ambulance for a speedy recovery. The Sports Minister had said that CR7 might have breached the protocols by travelling back and also not following the norm of social distancing. Ronaldo took to social media said that they had done everything according to the health protocol given by the authorities. Now once again, Vincenzo launched a fresh attack on CR7 and called him arrogant and disrespectful. Juventus Chief Backs Cristiano Ronaldo After Coronavirus Protocol Violation Claim By Italian Sports Minister.

He also said that someone of CR7's stature should not lie to the authorities and should be leading by example. Bigger the stature, the more responsible one should be. "The fame and skill of certain players [Cristiano Ronaldo] does not entitle them to be arrogant, disrespectful to the institutions and to lie. Cristiano Ronaldo has currently isolated himself and is in no contact with anyone. In Instagram live, Ronaldo had said that he wishes to get back to training soon. He also thanked the fans for their constant support.

"As you can see, I'm fine. I'm asymptomatic and I slept well last night. I wanted to thank you for the many messages of support you sent me. I hope to be back soon to train, play and enjoy my life. I am going through quarantine at home in Turin," he said during the live session. Ronaldo could be missing out on the match against Barcelona.

(The above story first appeared on LatestLY on Oct 17, 2020 05:28 PM IST. For more news and updates on politics, world, sports, entertainment and lifestyle, log on to our website latestly.com).