It has been a strange season for FC Goa so far with the team failing to maintain any consistency in terms of performance. Their latest setback has seen them lose twice on the bounce after winning a few games. The Gaurs are currently 7th in the points table with 8 points from 7 games. 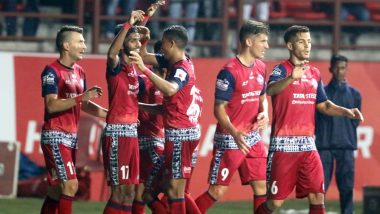 It has been a strange season for FC Goa so far with the team failing to maintain any consistency in terms of performance. Their latest setback has seen them lose twice on the bounce after winning a few games. The Gaurs are currently 7th in the points table with 8 points from 7 games. Next up for them is Jamshedpur, where they will hope their path to redemption begins. Jamshedpur is yet to lose a game this season which highlights the kind of defence they have. If somehow they are able to improve their attack further, they have the potential to challenge for the title. Jamshedpur FC versus FC Goa will be telecasted on Star Sports network and streamed on Hotstar from 7:30 PM IST. Indian Super League 2020–21 Points Table Updated.

Peter Hartley and Stephen Eze have formed a formidable partnership in the Jamshedpur backline, and despite coming some of the best attackers in the league, the duo have dominated. They are equally good in the air as they are with the interception. Indian winger Aniket Jadhav has been brilliant so far, and after scoring the winner against NorthEast United FC, his confidence will be sky-high. Nerijus Valskis has 21 goals and six assists since making his debut in the league one and a half seasons ago. The impact the Lithuanian has on the pitch makes him the player to watch for Jamshedpur. As the game takes a countdown, let’s look at the streaming and other details.

Fans can live telecast the Jamshedpur FC vs FC Goa match live on Star Sports channels.  Star Sports is the official broadcaster of Indian Super League (ISL) season 7 in India and will be live streaming the matches. So fans can tune into Star Sports 1, Star Sports 2, Star Sports Hindi and its HD substitutes to catch the live-action of the match.

Fans unable to follow live telecast of Jamshedpur FC vs FC Goa match on television can watch the game live online. Disney+Hotstar, OTT of Star Network, will be live streaming the JFC vs FCG match online for the fans. JIO and Airtel subscribers can also catch the action live on JIO TV and Airtel XStream.

FC Goa do not have any injury heading into the crucial game against Jamshedpur FC. Igor Angulo and Alberto Noguera are expected to play critical role in the attacking third for the Gaurs with Edu Bedia as the holding midfielder. The likes of Brandon Fernandes and Alexander Jesuraj need to bring in more cutting edge to their game with Goa lacking key passes from the centre.

Jamshedpur will feel they can get the job done against an unpredictable Goa team who has goals.

(The above story first appeared on LatestLY on Dec 23, 2020 01:16 PM IST. For more news and updates on politics, world, sports, entertainment and lifestyle, log on to our website latestly.com).