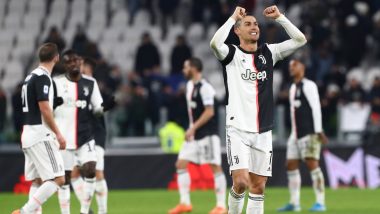 Italian champions Juventus will host Olympique Lyon in the second leg of their UEFA Champions League Round of 16 tie. The encounter will take place at the Allianz Stadium in Munich on Friday night (August 7, 2020). Fresh from the Serie A title, Maurizio Sarri's men might step into the forthcoming match as favourites. However, their recent performance has been underwhelming as they were defeated in their last two encounters. Nevertheless, they would like to go back to the winning ways in their next outing. On the other hand, Lyon have to put on an extra-ordinary show in order to upset the Old Lady. Meanwhile, dream11 fans can scroll down to get the best tips to choose goal-keepers, defenders, midfielders and strikers for JUV vs LYN match. Cristiano Ronaldo Sweats it Out in the Nets Ahead of Juventus vs Lyon.

Portugal ace Cristiano Ronaldo was in red-hot form during the Serie A and will eye to extend his purple patch in the Champions League. Along with him, Paulo Dybala will also have to come good in order to guide Juventus to their first Champions League crown since 1995. On the other hand, the visitors defeated Metz in the first leg and must back themselves to knock a big name out of the tournament. Now, let’s look at the best dream11 team for the upcoming game. Juventus Revisits Cristiano Ronaldo’s Hat-Trick Against Atletico Madrid.

Juventus vs Lyon, Champions League 2019–20, Dream11 Team Prediction: Goalkeeper – Wolciech Szczesny (LYN) can be chosen as a goal-keeper of your fantasy team.

Cristiano Ronaldo (JUV) should undoubtedly be picked as the captain of your team while his partner-in-crime Paulo Dybala (JUV) can be chosen as vice-captain.

(The above story first appeared on LatestLY on Aug 07, 2020 12:42 PM IST. For more news and updates on politics, world, sports, entertainment and lifestyle, log on to our website latestly.com).