Juventus duo Giorgio Chiellini and Paulo Dybala said goodbye to the home fans at Allianz Stadium as the Bianconeri fumbled a 2-0 advantage to settle for a 2-2 draw with Lazio. 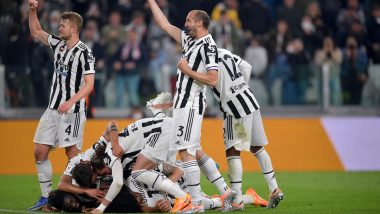 Rome, May 17 : Juventus duo Giorgio Chiellini and Paulo Dybala said goodbye to the home fans at Allianz Stadium as the Bianconeri fumbled a 2-0 advantage to settle for a 2-2 draw with Lazio. Captain Chiellini had announced his departure and hinted at a move to Major League Soccer despite having one year left on his contract, while Dybala will be a free agent in the summer after his negotiations with the club collapsed, and his future is still shrouded in doubt. Juventus 2-2 Lazio, Serie A 2021-22: Stoppage-Time Goal from Sergej Milinkovic-Savic Helps Lazio Earn Dramatic 2-2 Draw (Watch Goal Video Highlights).

Juve had secured fourth place before Monday, so the game turned out to be a more emotional one. Chiellini was subbed off in the 17th minute, a special arrangement to salute his 17 consecutive seasons in the Juve jersey, with the veteran receiving a standing ovation from the crowd, Xinhua reports. The home side raced into a 2-0 lead in the first half thanks to goals from Dusan Vlahovic and Alvaro Morata, but Lazio fought back through Alex Sandro's own goal before Sergej Milinkovic-Savic scored the equaliser in the dying minutes. One point was enough for the Aquile to book a spot in next season's Europa League. After the final whistle, Dybala, who spent seven years in Turin, burst into tears in the farewell ceremony. Also on Monday, Sampdoria dominated Fiorentina 4-1.

(The above story first appeared on LatestLY on May 17, 2022 11:30 AM IST. For more news and updates on politics, world, sports, entertainment and lifestyle, log on to our website latestly.com).