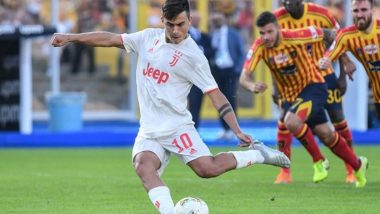 Juventus' Argentine forward Paulo Dybala shoots to score a penalty and open the scoring during the Italian Serie A footbal match Lecce vs Juventus on October 26, 2019 at the Stadio Comunlae Via del Mare in Lecce. (Photo by Alberto PIZZOLI / AFP) (Photo Credits: Getty)

After winning against Bologna 2-0, Juventus is back and will be taking Lecce at the Allianz Stadium. The team will once again look to extend their winning streak with this match and thus has an aim to extend their lead on the Serie A 2019-20 points table. For this, the team has announced a 20-member squad where Giorgio Chiellini has been excluded from the squad and Wesley makes his way into the team. Juventus took to social media and declared their squad for the upcoming game. Juventus vs Lecce, Serie A 2019-20: Check Out Predicted Line-Ups for JUV vs LCE at Allianz Stadium.

Contrary to the popular expectation, one would have thought that Cristiano Ronaldo and Paulo Dybala would be rested, but no, the two players will feature in the tie. Douglas Costa has been called back into the squad and  Mattia De Sciglio and Alex Sandro continue to remain out. Now, check out the 20-member squad for the upcoming game.

Talking about Juventus, the team stands at the top of the Serie A 2019-20 points table with 66 points. Having played 27 games, the Bianconeri has won 21 matches losing three and facing an equal number of draws. They are five points away from Lazio who are on number two with 62 points. With Inter Milan's 3-3 draw against Sassuolo, gives a chance to the Bianconeri to inch towards the title. Inter Milan stands on number three with 58 points winning 17 games, losing three and facing seven draws in the contest so far. The match will begin at 1.15 AM IST.

(The above story first appeared on LatestLY on Jun 26, 2020 06:24 PM IST. For more news and updates on politics, world, sports, entertainment and lifestyle, log on to our website latestly.com).