Juventus vs AS Roma, Serie A 2019–20: Cristiano Ronaldo, Edin Dzeko and Other Players to Watch Out in JUV vs ROM Football Match 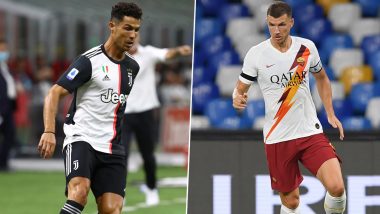 Juventus will take on AS Roma in the final game of the 2019-20 Serie A campaign. The clash will be played at the Allianz Stadium on August 1, 2020 (late Saturday night). Maurizio Sarri’s men have already secured the domestic league title and will be presented with the trophy following tonight’s game. The capital side, on the other hand, have confirmed fifth-place finish and Europa League qualification for next season. JUV vs ROM Dream11 Prediction in Serie A 2019–20: Tips to Pick Best Team for Juventus vs AS Roma Football Match.

Both teams have European competitions to play following the league’s conclusion so managers from both sides are expected to give their stars a well-deserved rest as fringe players could be given a chance to prove themselves. Juventus will take on Lyon in the Champions League while Roma face Sevilla in the Europa League. Cristiano Ronaldo Flaunts His Power Machine R189m Bugatti After Serie A 2019-20 Title Win.

Both sides have world-class players at their disposal who are capable of changing the game at any moment in time. So ahead of this clash we take a look at some crucial players from Juventus and AS Roma.

The Portuguese is second in the race for Serie A top scorer and will do everything in his power to cut the gap between him and Ciro Immobile and even overtake him. The 35-year-old has had a brilliant individual season and the golden boot will add the cherry on the top.

The Bosnian striker will be the biggest threat for Juventus in this game. Edin Dzeko has scored 16 goals in the league this season and will be hoping to add to his tally against a fairly changed Bianconeri back-line.

The Bosnian is on his way to Barcelona once the current season concludes and this will be the last time he plays a league game at the Allianz Arena. So the 30-year-old will be hoping to produce a brilliant performance at his home stadium.

Nicolo Zaniolo has been a breakout star for the capital side this season, The 21-year-old has scored six goals in the league campaign this season and this will be a great match for him to prove to the manager that he can step up in the bug games as well.

(The above story first appeared on LatestLY on Aug 01, 2020 04:50 PM IST. For more news and updates on politics, world, sports, entertainment and lifestyle, log on to our website latestly.com).