Juventus vs Atalanta, Serie A 2019-20: Check Out Predicted Line-Ups for JUV vs ATN at Allianz Stadium 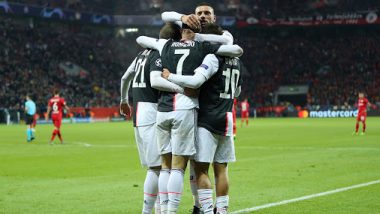 Juventus is all set to welcome Atalanta at the Allianz Stadium for the Serie A 2019-20 tie. The hosts will look to end Atalanta’s nine-match unbeaten streak. The visitors are flying with the kind of a form they have currently, they are just one point away from sealing the number two spot at the Serie A 2019-20 points table. Atalanta current has 66 points in its kitty and is just a couple of points away from grabbing the second slot. A win here would mean that Lazio who is on 68 gets pushed to number three. In this article, we shall bring to you the predicted line-ups for both the teams. But before that let’s have a look at the preview of the match. Juventus Declares 22-Member Squad for Serie A 2019-20 Match Against Atalanta, Paulo Dybala Back!

Juventus enter the game with 4-2 loss against Zlatan Ibrahimovic’s AC Milan whereas, Atalanta won 2-0 against Sampdoria. The last time the two teams met each other, the Old Lady went on to beat 3-1. Talking about Juventus, they are still down with the injuries of Sami Khedira, Mattia de Sciglio, Merih Demiral. Whereas, Paulo Dybala makes a comeback into the squad after a match long suspension. Atalanta, on the other hand, has a luxury of presenting the full squad. Josip Ilicic has returned to the squad after an ankle injury. Now, let’s have a look at the predicted line-ups of the squads.

Both the teams are expected to go with 4-3-3 line-ups. Talking about the match, it will begin at 1.30 am IST. A while ago, Juventus declared their 22-member squad on their social media accounts.

(The above story first appeared on LatestLY on Jul 11, 2020 06:26 PM IST. For more news and updates on politics, world, sports, entertainment and lifestyle, log on to our website latestly.com).