Real Madrid consider Kylian Mbappe as their top priority in the upcoming transfer window. The La Liga giants want to finalize the Frenchman’s arrival before making any other moves in the market or even focusing on contract renewal of Madrid players. 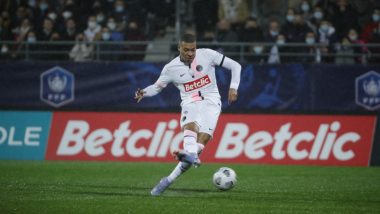 Kylian Mbappe’s future at PSG remains uncertain. The Frenchman is in the final year of his contract with the Parisian giants. However, the young striker is yet to sign a new deal with the Ligue 1 outfit. This will allow him to leave for free in the summer. Real Madrid are keeping close tabs on the situation as they hope to land the world cup winner. Kylian Mbappe Transfer News: PSG Determined To Keep Hold Of Star Forward.

According to a report from Goal, Real Madrid consider Kylian Mbappe as their top priority in the upcoming transfer window. The La Liga giants want to finalise the Frenchman’s arrival before making any other moves in the market or even focusing on contract renewal of Madrid players. Kylian Mbappe Defends Lionel Messi After Argentine Faces Backlash Owing to his Current Form, Says 'Even With Seven Ballons d'Or You Have to Adapt'.

Kylian Mbappe tried to join the Los Blancos last summer but the move collapsed as Paris Saint Germain were not ready to let their star man leave. PSG rejected multiple bids from Real Madrid including one in excess of €200 million. Despite the failed transfer, the Frenchman has performed well for the Parisians, scoring 24 goals in 32 games this season.

It is understood that Real Madrid are prioritising a final deal for Mbappe ahead of all other business related to the first team squad. The French international signings will dictate the Los Blancos’ further moves in the transfer market.

Club president Fiorentino Perez wants Kylian Mbappe to be the star signing in the summer. The World Cup winner is yet to sort out his future as his contract with PSG expires at the end of the current season. The Frenchman is allowed to negotiate with other clubs during this time.

Meanwhile, PSG are hopeful of keepi0ng the world cup winner at the club. The Parisians are confident of the Frenchman extending his stay and have presented him with an improved offer.

(The above story first appeared on LatestLY on Feb 28, 2022 05:30 PM IST. For more news and updates on politics, world, sports, entertainment and lifestyle, log on to our website latestly.com).