Lionel Messi, apart from being a legendary footballer, has also been a great ambassador of the game and on his 34th birthday, let us revisit some of his most magical moments, that one might not forget easily. 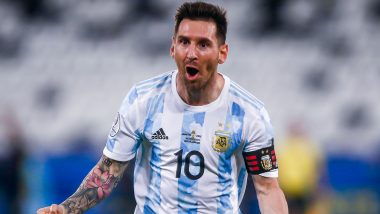 Lionel Messi isn't just a footballer. He is a phenomenon. A once in a lifetime player. A creative genius on the pitch. A record-breaker. Starting off as a teenager for Barcelona to becoming a household name and an absolute modern-day great, there is no denying the fact that he has been a great ambassador of football. Well, he turns 34 on Thursday, June 24, and on this day, let us take a look at some of his most magical moments, something that football fans might not forget for an eternity, perhaps as long as the game exists. Also, these are just some of the many moments that the great man would be known for. Lionel Messi’s Barcelona Contract Extension Set To Be Announced This Week: Reports

1) Silencing Bernabeu: Very few football matches in the world get bigger than an El Clasico, right? It was the perfect stage set up for someone like Messi to show why he is the best with a scintillating goal and an ice-cold celebration. which followed later. It was in the stoppage time of the match. The scoreline was locked at 2-2 and Real Madrid were trying hard to score a winner. But Messi and Barcelona had other ideas. Barcelona started a counter-attack and Messi, capitalising on a ball by Jordi Alba, beautifully put it behind a diving Keylor Navas. What followed would perhaps be remembered by football fans worldwide. The Argentine took off his shirt and held it in front of the fans, showing why he is the best at what he does. Well, Ronaldo didn't take that too kindly and instead did his own version of this celebration after scoring at the Camp Nou during a Spanish Super Cup semi-final.

✅ An iconic celebration. #OnThisDay in 2017, Messi was decisive in #ElClasico at the Santiago Bernabeu! 💙🌟❤️#LaLigaSantander pic.twitter.com/b6UFmC7pGt

2) Argentina's 'Messi'ah: He would always be remembered for bailing Barcelona out of trouble on many occasions but he has done it for his country too. Argentina football fans had started to realise a nightmarish truth--that their country might not be part of the 2018 World Cup. And that feeling intensified when Ecuador took the lead in just the first minute in a must-win World Cup qualifying match. But Messi wasn't just ready to go down without a fight. He led from the front and equalised soon after. He wasn't done yet and capped his performance off with a hat-trick. This performance of his booked Argentina's ticket to Russia.

3) A special tribute: The world had just lost a legend in Diego Maradona and football fans were yet to recover from that shock. In all of this, Messi made sure he gave a fitting tribute to one of his country's and football's greatest ever players. He scored a routine Messiesque goal, took off his Barcelona shirt to reveal a red and black no 10 jersey of Newell's Old Boys, where Maradona played. He blew a kiss, looked upwards and waved to the skies in remembrance of the departed soul. A sheer moment of respect, from one legend to another!

4) That goal against Getafe: Well Messi has scored some worldies like this throughout his career. This one was a tad special. Barcelona played Getafe in the 2006-07 Copa Del Rey and Messi dribbled his way past five players and coolly slotted the ball home from a very tight angle. The goal and the move that created it was so good that Barcelona dubbed it as the best goal in their history. Well, Messi was just 19 years back then and he already showed a glimpse that a legend is in the making.

Messi's goal vs Getafe in 2007 has been voted FC Barcelona's best ever goal, and it's hard to disagree. Pace, power, control, composure; an early taste of what was to come.

5) Retired? Not yet!: This isn't exactly a moment. Argentina fans would never forget the heartbreak when their side went down to Chile in 2016 Copa America final. A second consecutive loss to La Roja in the final and Messi, who missed a crucial penalty, couldn't bear the weight of that loss and decided to retire from international football. Despair turned into depression for football, especially Argentina fans as they saw their hero bid a very sad end to his international career. Messi, however wasn't done yet. He surprised everyone, bringing joy to all when out of love for his country, the star forward decided to return to playing for Argentina again. Well, this exactly isn't a moment of on-field brilliance for Messi but this move helped football fans all around the world stay happy and be peaceful about the fact that their star was still there to shine. 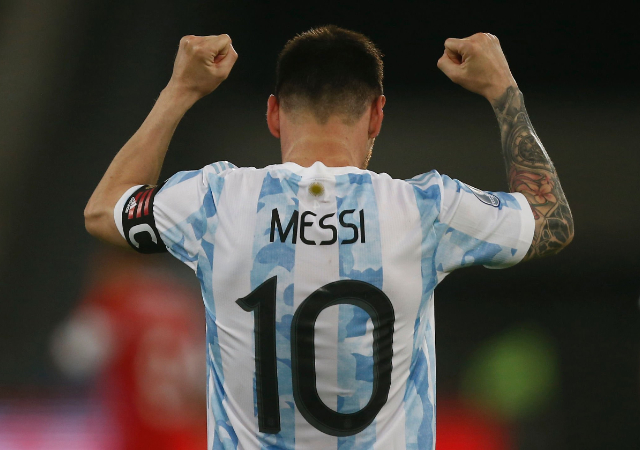 Messi this time too, has been on fire for Argentina, leading them to two wins in three games in the ongoing Copa America final. This time, just this time, Messi might finally get a taste of international success, given the fact that he might not be around for very long.

(The above story first appeared on LatestLY on Jun 24, 2021 07:30 AM IST. For more news and updates on politics, world, sports, entertainment and lifestyle, log on to our website latestly.com).