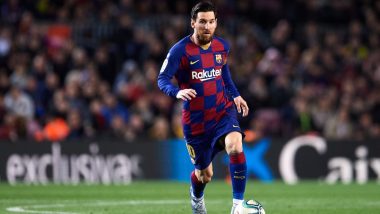 Lionel Messi has been at loggerheads for a long time now and as per the latest news report, the six-time Ballon d’Or winner has withdrawn his contract renewal talks with the club. Yes! You read it right! If the reports are to be believed, the Argentine is contemplating to quit Barcelona after a long tussle with them. Messi had signed the current deal in 2017 and this contract expires in 2021. But the six-time Ballon d'Or winner no longer wishes to stay at the club. Of late, Messi who has always been shy off the field has publicly criticised the club. Lionel Messi Puts Exit Rumours to Rest, Chooses to Stay at Barcelona This Summer.

First, he was quite annoyed with Eric Abidal at the start of the year for blaming the players for the sacking of Ernesto Valverde. Messi took to social media and slammed the sporting director for the same. In February, during an interview, he went on to say that Barcelona is not fit the Champions League. In April Messi once again took to social media and slammed the management of Barcelona which said that the players were unwill to accept the pay cuts owing to the coronavirus crisis.

Recently he was furious with the manager of Barcelona Quique Setien after a 2-2 draw against Celta Viga in the La Liga 2019-20 and asked for his replacement in form of Xavi or Pep Guardiola. Also, a video had emerged online where Messi was ignoring the instructions by Eder Sarabia. This clearly showed that not everything is well at the Barcelona camp.

(The above story first appeared on LatestLY on Jul 03, 2020 11:00 AM IST. For more news and updates on politics, world, sports, entertainment and lifestyle, log on to our website latestly.com).