Joel Matip's towering header opened the floodgates just before half-time and Salah killed the game from the penalty spot before adding his second with a wonderful run and finish. Liverpool open up a three-point lead at the top with Arsenal still in second, but City and Tottenham can move to within two points when they are in action on Sunday. 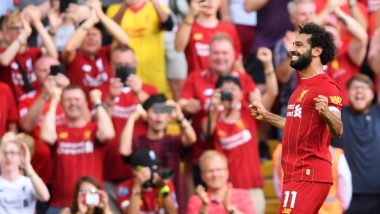 Liverpool, August 24: Liverpool soared clear at the top of the Premier League by sweeping aside Arsenal 3-1 at Anfield thanks to a Mohamed Salah double on Saturday. Both sides started with the only 100 percent records left in England's top-flight, but Jurgen Klopp's men demonstrated the chasm that exists behind them and reigning champions Manchester City with a dominant display.

Joel Matip's towering header opened the floodgates just before half-time and Salah killed the game from the penalty spot before adding his second with a wonderful run and finish. Liverpool open up a three-point lead at the top with Arsenal still in second, but City and Tottenham can move to within two points when they are in action on Sunday.

Arsenal have now lost their last three visits to Anfield by a combined score of 12-2 and early season optimism they could pose a threat to Liverpool and City in the title race was snuffed out despite promising signs from club record signing Nicolas Pepe. The Ivorian was handed his first start since a £72 million ($87 million) move from Lille and showed why he was so coveted by posing a constant threat on the counter-attack.

Liverpool were camped in the Gunners' half for the opening 10 minutes, but the visitors were nearly gifted the lead when Adrian, deputising for the injured Alisson Becker in goal, got in Virgil van Dijk's way as he dealt with a hopeful long ball for Pepe. The Spanish stopper was at fault for Southampton's consolation in a 2-1 Liverpool win last weekend but escaped this time as the ball fell to Pierre-Emerick Aubameyang and his chipped effort drifted inches wide. Premier League 2019-20 Fixtures Schedule in PDF for Free Download Online: Full EPL Time Table With Week-Wise Football Matches, Timings in IST and Venue Details.

Pepe then became the first player to dribble past Van Dijk in the Premier League for nearly 18 months as he showed his blistering pace and sent a curling effort from outside the area just wide. At the other end Liverpool's high press was often forcing mistakes as Arsenal tried to play their way out from the back and Dani Ceballos's careless pass across his own box was intercepted by Sadio Mane, whose shot was just too close to Bernd Leno.

Arsenal's big chance to try and end a miserable run without a win away to top six opposition now stretching back 23 games came when Pepe skillfully dribbled past Andy Robertson to burst clear on goal, but his shot was weak and easily saved by Adrian. Instead, Liverpool cranked up the pressure before the break and got the breakthrough on 41 minutes when Trent Alexander-Arnold's corner was met powerful by Matip's head.

Once in front, the European champions showed their class to roll through the gears in the second-half and hand Arsenal another Anfield beating. Questions will be asked of the imbalance in the Gunners' recruitment strategy as they spent big on Pepe for an already fearsome forward line including Aubameyang and Alexandre Lacazette, who started on the bench, but waited until deadline day to sign a much-needed centre-back in David Luiz.

The Brazilian showed why Chelsea were not desperate to keep hold on him as he hauled back Salah to concede a soft penalty, which the Egyptian emphatically converted. Nine minutes later, Arsenal's new centre-back was embarrassed once more as Salah raced onto Fabinho's pass, beyond Luiz who did not want to dive in and see a second yellow card, before curling clinically into the far corner. Manchester United Suffer Shock 1-2 Defeat Against Crystal Palace; Fans Post Funny Memes and Jokes After Another Disappointing Result by The Red Devils.

With still half an hour to play, Unai Emery's men could have folded but, to their credit, they stayed in the game and got their reward six minutes from time when substitute Lucas Torreira fired home at the second attempt from Aubameyang's cut-back.

(The above story first appeared on LatestLY on Aug 25, 2019 12:24 AM IST. For more news and updates on politics, world, sports, entertainment and lifestyle, log on to our website latestly.com).