Thiago Alcantara, Divock Origi and Nathaniel Phillips are ruled out of the tie for Liverpool with injuries but there is some positive update on the status of Virgil Van Dijk and James Milner as they have put the knocks suffered against Arsenal past them to feature. 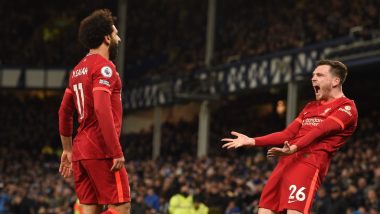 Manchester City is flying away with the English Premier League 2021-22 title and their latest win over Chelsea all but ended the latter’s title hopes. Liverpool, with two games in hand over Manchester City, will still believe they are in it despite a 14 point deficit from the summit. The Reds are in action against Brentford at home with massive three-points on the line. No game comes easy in England’s top tier and Brentford has shown they can put up a show against the top teams despite being a newly promoted team. The Reds were held to a goalless draw against a ten-man Arsenal in the Carabao Cup in their previous match. The hosts need to improve their attack with some top players missing due to the AFCON. Liverpool versus Brentford will be telecasted on the Star Sports network and streamed Hotstar from 7:30 PM IST. Mohamed Salah Expresses Desire To Remain at Liverpool, Insists He Isn’t ‘Asking for Crazy Stuff’ Amidst Talks of a New Contract

Thiago Alcantara, Divock Origi and Nathaniel Phillips are ruled out of the tie for Liverpool with injuries but there is some positive update on the status of Virgil Van Dijk and James Milner as they have put the knocks suffered against Arsenal past them to feature. Roberto Firmino will have Diogo Jota and Curtis Jones on either side of the flank. Fabinho is the one that holds the fort in midfield and Jordan Henderson and Alex Oxlade-Chamberlain should push up to join the attack.

Frank Onyeka is away on AFCON duties for Brentford while Josh Dasilva, Mathias Jorgensen, Charlie Goode and David Raya Martin are out injured. Bryan Mbeumo and Ivan Toney are lively in the attacking third and the Reds cannot afford to give them space. The away team will field a five-man midfield to provide a cushion to the defence. Christian Norgaard is the one that dictates the tempo of the game for Brentford but he needs his fellow teammates to be judicious in possession. Liverpool, despite the long absentee list, has enough quality to get the job done against Brentford.

The Liverpool vs Brentford Premier League 2021-22 match will be played at Anfield. The football game will be held on January 16, 2021 (Sunday) and is scheduled to begin at 07:30 pm IST (Indian Standard Time).

Where to Get Live Telecast of Liverpool vs Brentford, Premier League 2021-22 Football Match?

Fans in India can watch the Liverpool vs Brentford match live on Star Sports channels since Star Network is the official broadcaster for the Premier League 2020-21 in India. Fans can tune into Star Sports Select SD/HD channels to watch live telecast the clash.

How to Get Free Live Streaming of Liverpool vs Brentford, Premier League 2021-22 Football Match?

(The above story first appeared on LatestLY on Jan 16, 2022 02:15 PM IST. For more news and updates on politics, world, sports, entertainment and lifestyle, log on to our website latestly.com).