Pep Guardiola’s side were beaten convincingly in the reverse fixture by PSG and revenge will certainly be on the minds of the English champions. Both sides have been in solid form domestically which sets up for a high octane clash at Etihad. 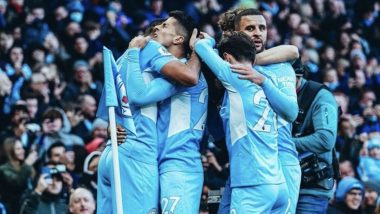 Group A leaders Manchester City host French giants Paris Saint Germain in the UEFA Champions League in a game that may well decide who finishes top of the points table. Pep Guardiola’s side were beaten convincingly in the reverse fixture by PSG and revenge will certainly be on the minds of the English champions. Both sides have been in solid form domestically which sets up for a high octane clash at Etihad. With a galaxy of stars on display, there is a lot of buzz surrounding the fixture. The prestigious European crown has evaded both these clubs despite strong financial backing and there is a genuine belief both can go all the way this season in Europe’s top tier tournament. Chelsea Thrashes Juventus 4-0 in UCL 2021-22 Match.

Jack Grealish missed the Everton game due to a minor injury and may make the bench for the PSG game. Kevin de Bruyne is out after a positive COVID 19 test and joins Ferran Torress on the sidelines. Riyad Mahrez and Ruben Dias were rested for the weekend game and both are likely to make the starting eleven. Phil Foden, Bernardo Silva and Joao Cancelo are the in-form players for the hosts and PSG will need to be wary of the threat they possess. Barcelona vs Benfica, UCL 2021-22 Match Ends With Goalless Draw.

PSG boss Mauricio Pochettino has been linked with a move back to England with Manchester United and his pre-game press conference was dominated by these rumours. On the game front though, there is positive news with Sergio Ramos taking part in his first full training since joining the French club. The front three of Neymar, Kylian Mbappe and Lionel Messi will feature with Marco Verratti keeping things calm in midfield.

Manchester City vs PSG clash in UEFA Champions League 2021-22 will be played at Etihad Stadium in Manchester on November 25, 2021 (Thursday). The game has a scheduled time of 01:30 AM IST (Indian Standard Time).

Where To Watch Live Telecast of Manchester City vs PSG, UEFA Champions League 2021-22 Match on TV?

Sony Pictures Network are the official broadcasters of UEFA Champions League 2021-22 in India and will telecast the games live on its channels. Fans can tune into Sony Sports HD/SD channels to watch the live telecast of Manchester City vs PSG on TV.

Sony Pictures Network’s official OTT platform Sony LIV will be streaming the game live for its fans in India. You can tune into the Sony Liv app or website to watch Manchester City vs PSG, UEFA Champions League 2021-22 live streaming online. JioTV would also provide live streaming for this match. The game should feature goals and a 2-2 draw looks the likely outcome from what promises to be a pulsating contest.

(The above story first appeared on LatestLY on Nov 24, 2021 10:02 PM IST. For more news and updates on politics, world, sports, entertainment and lifestyle, log on to our website latestly.com).