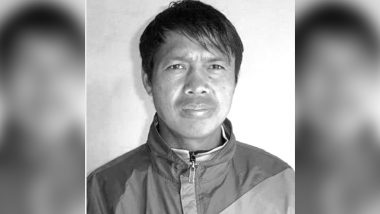 Former India and Mohun Bagan footballer Manitombi Singh passed away on August 9, 2020 (Sunday) after a prolonged illness at the age of 39 at his native village near Imphal in Manipur as per reports. He was a member of Blue Tigers squad that triumphed the LG Cup at the Ho Chi Minh City in Vietnam in 2002. The retired footballer is survived by his wife and an eight-year-old son. Manitombi Singh, Former India Defender and Mohun Bagan Captain, Dies at 39 in Manipur.

The Manipur-born footballer played for Kolkata giants Mohun Bagan from 2003 to 2005 and won several accolades with them. The Kolkata side paid tribute to their former captain as they wrote ‘Mohun Bagan family is deeply saddened by the untimely demise of former club captain Manitombi Singh. Our thoughts and prayers are with his family during this difficult time’ on their official social media account.

Our thoughts and prayers are with his family during this difficult time.

The official account of Indian Football Team also expressed their grief over Manitombi Singh’s untimely demise. Mr Praful Patel, AIFF president also sent his condolence message. ‘It is sad to hear that Manitombi Singh is no more. I share the grief.’ He said. Mr Kushal Das, AIFF General Secretary said, ‘Manitombi was a talented footballer and full of energy. May his soul rest in peace,’

Along with being part of the LG Cup winning team, Manitombi Singh represented India in the 2002 Asian Games in Busan as well. At the club level, the footballer captained Mohun Bagan to win the Airlines Gold Cup in 2004. He was part of the Mohun Bagan's triumphant IFA Shield campaign in 2003.

(The above story first appeared on LatestLY on Aug 09, 2020 04:43 PM IST. For more news and updates on politics, world, sports, entertainment and lifestyle, log on to our website latestly.com).