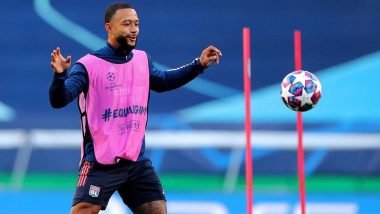 Barcelona seems to have hit a roadblock in their pursuit of Memphis Depay as Lyon recently confirmed a new squad number for their star striker. The Catalan giants have been linked with the Dutch star since the appointment of new manager Ronaldo Koeman, who has coached Depay at during his successful stint as Netherlands boss. However, the Blaugrana are yet to submit an official bid for the 26-year-old. Barcelona Transfer News Latest Update: Memphis Depay Set to Sign With Catalan Side.

Barcelona are a club in tatters but are looking to rebuild under new boss Ronald Koeman. Memphis Depay has been identified as the primary target, however, securing his transfer is not easy as the Catalan club first needs to sell players according to La Liga’s rule and also in order to gather funds for the Lyon star. Memphis Depay Transfer News Latest Update: Barcelona Must Sell Players Before Signing Dutch International.

The La Liga side are tipped to be the favourites to sign Memphis with reports suggesting that they have agreed personal terms with the Dutch star and also Lyon are willing to accept a bid around €30m for him. The 26-year0old also has a good relationship with Ronald Koeman which could make his integration in the team that much easier.

However, Lyon president Jean-Michel Aulas, recently stated that Barcelona cannot afford to sign the former Manchester United forward. And with the Catalans yet to submit an official offer for the Dutchman, the French side have given their striker a new squad number for the 2020-21 footballing season.

The new kit number could mean that Lyon are counting on Memphis Depay to stay at the club for the upcoming campaign and could make matters difficult for Barcelona. However, this is not the only thing the Catalans have to worry about as Italian side AC Milan have also entered in the race to lure Memphis Depay away from the French side.

As per reports in Italy, the Rossoneri are making a move for Memphis Depay which will see Brazilian Lucas Paqueta move in the opposite direction. The 26-year-old hasn’t signed a new contract with Lyon, which ends in July 2021 and the prospect of playing with his idol Zlatan Ibrahimovic could persuade the Dutch star to join the Italian giants.

(The above story first appeared on LatestLY on Sep 19, 2020 09:46 AM IST. For more news and updates on politics, world, sports, entertainment and lifestyle, log on to our website latestly.com).