Neymar's PSG future is uncertain as he has informed to leave the club as soon as possible. The Parisians are not happy with the player's contribution in the UEFA Champions League last year. 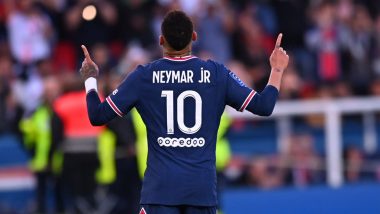 Thiago Silva has urged his compatriot Neymar to join Chelsea this summer as the Brazilian forward's future is uncertain at PSG. According to reports, the Ligue-1 champions do not want to keep Neymar for the next season and have already informed the player to find a club in the summer transfer window. The 30-year-old attacker just completed his fifth season at Paris after leaving Barcelona for a world record fee of $222 million in 2017. Chelsea Close to Sign Raphinha From Leeds United After Breakthrough in Verbal Agreement.

Spanish media have reported that Nasser Al-Khelaifi, the PSG director, has informed Neymar and his entourage that the player can leave the club as he is not in the club's plan for next season. PSG are currently on the course of an overhaul in their team squad after a shocking defeat at the hands of their new European foes, Real Madrid, in the Champions League, and it is believed that the fans and the officials of PSG are not happy with their UCL exit and want to get rid of some specific players.

Meanwhile, Chelsea defender Thiago Silva, who had a significant stint at PSG, wants Neymar to move to Stamford Bridge amid rumours of the Brazilian's potential Barcelona return. However, it is almost impossible for the Catalan side to re-sign Neymar due to their devastating financial condition.

As Chelsea is on the hunt for new players this summer and is already in the market to complete signings of their top targets, Silva believes that Neymar is the suitable candidate to strengthen the club's attacking frontline after the loan move of Romelu Lukaku to Inter Milan. Ousmane Dembele Transfer News: Chelsea Target Waiting For Improved Offer From Barcelona.

The Blues' centre-back and Neymar share a special bond of friendship due to their playing time at PSG and Brazil national team. When asked about Neymar's transfer situation, the Brazilian defender told the press: "He has to go to Chelsea. If that happens, it would be for the best. This needs no further comments. So far, I don't know anything, but I hope it comes to fruition."

Now it remains to be seen whether Thomas Tuchel makes a move for signing the 30-year-old forward to bolster his attacking front in the coming season as his rival teams like Liverpool and Manchester City have given an extra boost to their attack.

(The above story first appeared on LatestLY on Jun 29, 2022 11:39 AM IST. For more news and updates on politics, world, sports, entertainment and lifestyle, log on to our website latestly.com).