Chelsea's new owners are keen on signing Ousmane Dembele from Barcelona this summer and are planning to reopen talks with the Frenchman if he is still available once the takeover is completed. 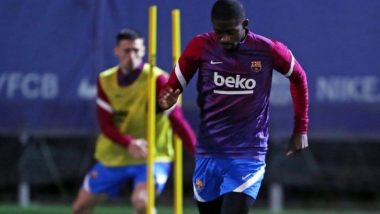 Chelsea have been inconsistent towards the end of the season and would have hoped to finish the campaign in much better form than they are at the moment. However, the Blues are looking forward to the next season and already identified their targets for the summer window and Frenchman Ousmane Dembele is one of them. Barcelona President Joan Laporta Wants Frenchman To Renew His Contract.

According to a report from 90min, Chelsea's new owners are keen on signing Ousmane Dembele from Barcelona this summer and are planning to reopen talks with the Frenchman if he is still available once the takeover is completed. Chelsea Agree Terms With LA Dodgers Part-Owner Todd Boehly To Sell Premier League Club.

The Frenchman has not renewed his contract with Barcelona and will become a free agent in the summer. The Blues were the favourites to land the winger but the deal stalled after sanctions imposed on former owner Roman Abramovich by the UK government.

However, new chief Ted Boehly is confident that the takeover will be completed in time and the club can re-open the talks with the French winger in the summer.

Barcelona are also working to keep Ousmane Dembele at the club but is looking highly unlikely that the winger will extend his stay. The Catalans have offered the Frenchman a new and improved contract and are waiting for his response.

'He wants to stay, but he is very tempted by other options that offer better conditions,' said Barcelona president Joan La[prta in a recent interview. 'The offer has been presented for a long time and they have asked us for time until the end of the season,' he added.

(The above story first appeared on LatestLY on May 18, 2022 06:19 PM IST. For more news and updates on politics, world, sports, entertainment and lifestyle, log on to our website latestly.com).