The French midfielder removed a beer bottle placed in front of him and kept it on the ground while attending a press conference after France clinched a 1-0 win over Germany in Euro 2020 opener. Pogba was named Man of the Match for his performance in the midfield. 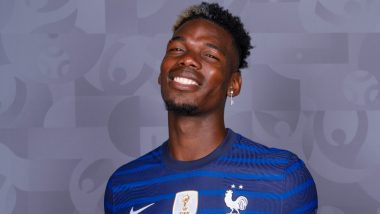 France star Paul Pogba on Wednesday removed a beer bottle placed in front of him during the post-match press conference after his side inflicted a 1-0 defeat on Germany in their Euro 2020 opener at the Allianz Arena. The midfielder thus becomes the second player to perform such a gesture, a day after Portugal ace Cristiano Ronaldo had removed Coca-Cola bottles placed in front of him and encouraged people to drink water instead, during a press conference. Sports News | Own-goal Gives France 1-0 Win over Germany at Euro 2020

Pogba who is a devout Muslim, removed the beer bottle and kept it underneath the table while attending to the press after France defeated Germany to start their Euro 2020 campaign in style. An own goal by Mats Hummels was the difference between the two sides.

Alchohol is something which is forbidden in Islam and Pogba's gesture further reinforced the idea. This would surely impact the manufacturers Heineken, who are also one of the official sponsors of Euro 2020. France would next take on Hungary on June 19 at the Ferenc Puskas Stadium.

(The above story first appeared on LatestLY on Jun 16, 2021 01:18 PM IST. For more news and updates on politics, world, sports, entertainment and lifestyle, log on to our website latestly.com).