Erik Lamela, Patrick Schick and Mehdi Taremi have qualified for the Puskas 2021. FIFA announced the finalists for the gong has been announced by FIFA on social media. The Puskas Award is given to the most beautiful or significant goal-scorer. Check out the details of the goals scored by these finalists. 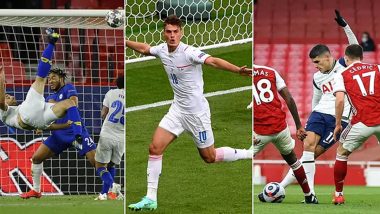 Football body, FIFA has announced the three finalists for the Puskas Award 2021 which is bestowed to be the player who has scored the most significant or the most beautiful goal on the calendar. For 2021, Erik Lamela, Patrick Schick and Mehdi Taremi have qualified for the prized possession. The official account of the FIFA World Cup took to social media and posted the names of the three finalists. As one may recall, Erik Lamela has scored a stunning goal during Arsenal vs  Tottenham, Premier League 2020-21. Patrik Schick's Strike From Halfway Line Against Scotland Voted As Goal of Euro 2020 (Watch Video).

The Rabona by Tottenham midfielder will be remembered for a long time. The classy goal netted from the outside of the box has been cherished by fans and football pundits from all over the world. Patrick Schick's half-line screamer during Czech Republic vs Scotland, Euro 2020 is yet another goal that has been named in the top three. Schick's fired a goal from 49.7 metres and thus got his name registered in the Puskas 2021. The previous record of a goal scored from the longest distance - 38.6m - was held by German midfielder Torsten Frings at Euro 2004.

Mehdi Taremi's bicycle kick was also something that the fans can still not forget. He netted that beautiful goal during Chelsea vs Porto, Champions League 2020-21. The winner of the award will be revealed on 17 January 2022.

(The above story first appeared on LatestLY on Jan 05, 2022 03:12 PM IST. For more news and updates on politics, world, sports, entertainment and lifestyle, log on to our website latestly.com).