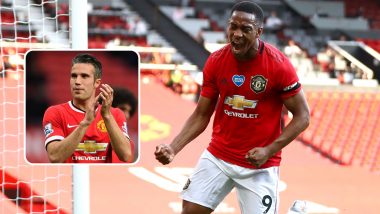 Anthony Martial scored his first senior career hat-trick to fire Manchester United to a 3-0 win over Sheffield United in Premier League on Wednesday. The Frenchman also became the first Red Devils’ player to bag a hat-trick since Robin van Persie led the club to its record 20th domestic league title with a treble against Aston Villa in 2013. Seven years have passed since then with no United player getting a hat-trick before Martial did it against Sheffield United. Van Persie took to twitter to congratulate the Frenchman while also jokingly taking a dig at the club y stating that it "took a while" for someone else to emulate his scoring record. Anthony Martial’s Hat-Trick Against Sheffield United Ends Disastrous Manchester United Run in Premier League.

Martial struck twice in the first half from similar positions before completing his first senior treble with a wonderful dink over goalkeeper Simon Moore in the second half. His goals powered Ole Gunnar Solskjaer’s side to their first win since the resumption of the league last week.

Marking our return to OT with a big W 🤩#MUFC #MUNSHU pic.twitter.com/lhqqmW08Xj

Before Martial’s feat, Van Persie’s treble against Aston Villa in 2013 was the last time a United player had netted a hat-trick. Van Persie's treble moment was also Sir Alex Ferguson’s final match in charge of the Red Devils which makes Martial, the first United player to net a hat-trick in Post-Ferguson era.

It took a while.. but happy that someone has taken the baton after 7 years 😉 Congratulations on the hat-trick @AnthonyMartial 🔥 #MUFC https://t.co/AJNbRUIo6g

Congratulating Martial for his feat, Van Persie wrote “It took a while.. but happy that someone has taken the baton after 7 years. Congratulations on the hat-trick @AnthonyMartial.” Martial also replied to the Flying Dutchman and thanked him while also calling Van Persie a ‘legend’.

Paul Pogba and his partnership with Bruno Fernandes was the talk and central piece of attraction before the match. But t24-year-old Martial ensured he was the headline when the match ended with a superb hat-trick.

Martial netted his first within the opening seven minutes getting to the end of a ferocious drive from Marcus Rashford to open the scoring. United then doubled when Martial scored again from a similar low-cross from the right.

He completed his hat-trick in the 74th minute with a dink over Moore after Rashford played him through on goal. United boss Solskjaer was delighted with the performance of the Frenchman and the entire team but warned that they will have to more clinical in front of goal. United remain only two points behind fourth-placed Chelsea, who host Manchester City on Thursday.

(The above story first appeared on LatestLY on Jun 25, 2020 06:08 PM IST. For more news and updates on politics, world, sports, entertainment and lifestyle, log on to our website latestly.com).