The Portuguese centre-back tipped club teammate Kevin De Bruyne and Tottenham Hotspur striker Harry Kane to win this award. More than 50% of the votes cast for this award were for nine players from the Premier League. 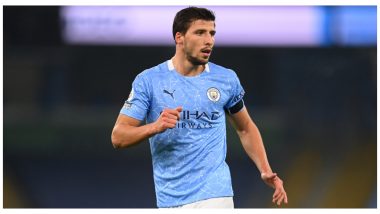 Portugal and Manchester City defender Ruben Dias on Thursday was named England's Footballer of the Year, as voted annually by the Football Writers' Association (FWA). The centre-back thus became the first defender to clinch this title since Scottish right-back Steve Nicol, who had won it in 1989. He is also the third player to win this trophy in his first season at a club, after Juergen Klinsmann (Tottenham Hotspur, 1994-950 and Gianfranco Zola (Chelsea 1996-97). Riyad Mahrez, Kevin de Bruyne, Ruben Dias & Others React After Manchester City Qualifies for UCL Finals for the First Time!

Dias tipped club teammate Kevin De Bruyne and Tottenham Hotspur striker Harry Kane to win this award. More than 50% of the votes cast for this award were for nine players from the Premier League.

Footballer of the Year 2021

The 24-year old Portuguese defender had arrived at Manchester City from Benfica for a a fee of 68 million and has turned out to be a very important part of their defensive unit, partnering strongly with John Stones. His performances at the back is one of the reasons why Manchester City have had a successful season--winning their third Premier League and the EFL Cup and booking a spot in the final of the Champions League.

“It means something special because normally, the ones who finish the plays (score goals) are the ones getting the spotlight but me receiving this prize is a major example of our team and the way we work – the way we build our game. It reflects all the togetherness we have on the pitch, the spirit in the team and how we perform,” said Dias.

“With these players, for me to be receiving this award, it shows how we play like a family," he added. Last week, England and Chelsea attacker Fran Kirby won the FWA women's Footballer of the Year.

(The above story first appeared on LatestLY on May 20, 2021 06:11 PM IST. For more news and updates on politics, world, sports, entertainment and lifestyle, log on to our website latestly.com).