Serie a 2019–20 to Resume on June 20, Coppa Italia Ties to Be Played a Week Earlier: Italy Sports Minister Vincenzo Spadafora 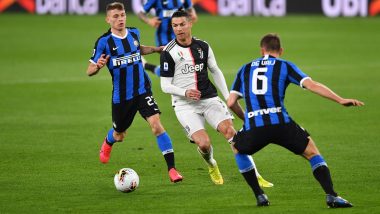 Serie A is all set to return on June 20 after an agreement between the league bosses and country’s government was finally reached on Thursday, said Italy Sports Minister Vincenzo Spadafora. Serie A 2019-20 had been suspended since March 10 due to the coronavirus outbreak but with the pandemic situation gradually improving in the country after initial devastation, the league was looking forward to resuming the season by mid-June. Initially, the league was to restart on June 13 but with the nationwide lockdown extending to June 14 that looked impossible. English Premier League to Restart From June 17 With Aston Villa Taking On Sheffield United and Manchester City Locking Horns With Arsenal.

"The league resumes on June 20 - I have already consulted with Prime Minister Conte,” said Spadafora following the meeting with the PM, representatives of the Italian Football Federation, the Players’ Association and the Serie A bosses. "Football was going to restart when we had the right safety conditions and when the CTS would give the go-ahead to the protocols.

“I hope we can complete the Coppa Italia in the week from June 13 to 20. It would be a signal to the benefit of all Italians, given it's the competition shown on public service [television]. My wish is coming true for the whole world of sport to start again at the same time. We deny the story that I had any reservations about the world of football,” he added

Juventus lead the Serie A 2019-20 points table and were a point ahead of the second-placed Lazio with 12 matches remaining. Inter Milan were third at least nine behind Juve with a match in hand when the season was halted. Meanwhile, the Coppa Italia matches could be played a week before Serie A resumes, said Spadafora.

Both the second legs of the Copa Italia semi-finals as well as the final remains to be played. Ac Milan had drawn 1-1 with Juventus at home, while Napoli had beaten Inter 1-0 on the road in the first leg of the semis. Interestingly, Serie A's decision to return back into action came on the same day the Premier League announced its decision to resume the season from June 17.

(The above story first appeared on LatestLY on May 29, 2020 08:54 AM IST. For more news and updates on politics, world, sports, entertainment and lifestyle, log on to our website latestly.com).