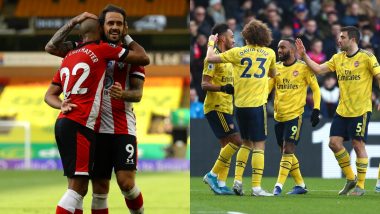 Southampton vs Arsenal, Premier League Online Live Streaming and Live Telecast: Arsenal will be eager to return back to winning ways when they travel to St Mary’s for their next Premier League 2019-20 match having faced consecutive defeats in their opening two games on return to action after a three-month coronavirus halt. The Gunners were thrashed 0-3 by Manchester City in their first match in project restart before also succumbing to a 1-2 loss at Brighton despite leading in the second half. Whereas, Southampton beat the relegated Norwich City 3-0 in their only match. Southampton vs Arsenal Dream11 Prediction in Premier League 2019–20.

Ralph Hasenhuttl’s side, who are 14th in the points table and can go level on points with Arsenal with a home victory, will be eager to make most of the visitors’ depleted squad and clinch a win which will take them 12 points clear of the relegation zone and guarantee another season in English top-flight. Both sides played a thrilling 2-2 draw in the reverse league fixture with Arsenal coming back twice to draw the match.

Mikel Arteta will be worried about how to put together a strong playing XI with most of his regulars in the treatment table. Goalkeeper Bernd Leno joined fellow defenders Callum Chambers, Pablo Mari, Cedric Soares in the long injury list. Midfielders Lucas Torriera and forward Gabriel Martinelli are still out and David Luiz is serving the final game of his two-match suspension.

Southampton vs Arsenal, Premier League 2019-20 match will take place on June 25, 2020 (Thursday). The match will be played at the St Mary’s Stadium and is scheduled to start at 10:30 pm IST (Indian Standard Time).

Where to Watch the Live Telecast of Southampton vs Arsenal, Premier League 2019/20 Season Football Match? TV Channels in India

Hotstar will be live streaming the Southampton vs Arsenal match online for its fans in India. Fans can catch the game live online by either switching to Hotstar app or watch in on the website.

After 11 successive unbeaten away games, Arsenal have now lost two on the trot. But despite their poor form, the Gunners will be confident of a better result having lost just once in their last eight meetings with Southampton. Arsenal captain Aubameyang needs one more goal to become the sixth-fastest footballer to hit 50 Premier League goals and will be eager to do it at the St Mary’s Stadium.

(The above story first appeared on LatestLY on Jun 25, 2020 04:59 PM IST. For more news and updates on politics, world, sports, entertainment and lifestyle, log on to our website latestly.com).