What is Barcagate Scandal? Know About the Controversy Which Resulted in Arrest of Former Barcelona President Among Others

The Catalan police raided Barcelona’s facilities on Monday morning and have confirmed that arrests have been made regarding the Barcagate controversy. It is understood that former president Josep Bartomeu, CEO Oscar Grau, head of legal Roman Gomez Ponti and Jaume Masferrer – the former right-hand man of Bartomeu – are also reported to have been among those arrested. 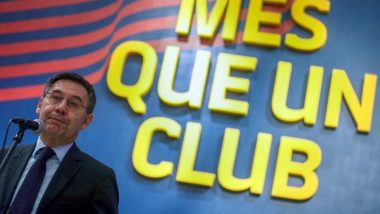 On Monday, Catalan police raided the offices of La Liga giants Barcelona at the Nou Camp Stadium in relation to a corruption investigation which has resulted in the arrest of former president Josep Maria Bartomeu and others. According to the Spanish media, the operation was related to last year's 'Barcagate’ scandal which saw many club directors resign from their position in April 2020. Barcagate: Spanish Police Enter Barcelona’s Camp Nou Stadium in Search Operation.

The Catalan police raided Barcelona’s facilities on Monday morning and have confirmed that arrests have been made but have not disclosed the names of people detained. It is understood that former president Josep Bartomeu, CEO Oscar Grau, head of legal Roman Gomez Ponti and Jaume Masferrer – the former right-hand man of Bartomeu – are among those arrested by the cops in relation to the ‘Barcagate’ incident.

Josep Bartomeu has not been involved with the Catalan giants since he and his board resigned from their posts in October last year, triggering a new set of presidential elections. Carles Tusquets has been in charge of the club until a new president arrives in March.

Last year, Barcelona were accused of launching a campaign to criticize several key figures of the club on social media. Club legends such as Lionel Messi, Gerard Pique, Xavi and Pep Guardiola among others were targeted by a third party to damage their reputations in a three-year smear campaign.

The third party were said to be the company I3 Ventures, which allegedly used to promote their own messages both on Twitter and Facebook to discredit others and this was revealed by Cadena Ser’s El Larguero, who published a number of documents supporting that claim.

Along with allegations of a smear campaign, Barcelona were also accused of paying an outrageous amount of around £170,000 million - six times the going rate for social media campaigns -  for the contracts which indicated that someone inside the club was making money off it.

Barcelona’s then-president, Josep Bartomeu, denied any such allegations and later in July 2020, an external conducted by Price Waterhouse Coopers audit ruled that the club did not commission anyone to run an operation to damage the reputations of any former or current players.

Emili Rousaud, a member of the Barcelona board under Bartomeu, who resigned in 2020 following the ‘Barcagate’ incident, had said ‘Whether or not I believe someone has touched the club's treasury? Yes. Who? I don't know.’

The investigation was ongoing since the and on Monday (March 1, 2021) Catalan police raided the Barcelona headquarters which has reportedly resulted in the arrests of several members of the former Barcelona board.

(The above story first appeared on LatestLY on Mar 01, 2021 05:40 PM IST. For more news and updates on politics, world, sports, entertainment and lifestyle, log on to our website latestly.com).