38-year-old Cristiano Ronaldo is not having his best tournament. Continue reading to find out the possibility of him featuring in the Portugal line-up for the important FIFA World Cup 2022 round of 16 match against Switzerland. 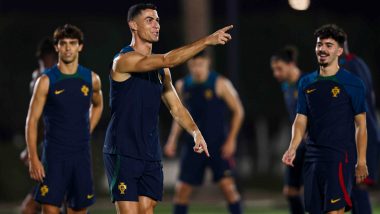 Portuguese superstar Cristiano Ronaldo is not having the best of his time at the FIFA World Cup 2022. So far he has scored only one goal and has not been in his best form. Despite that, Portugal managed to finish at the top of Group G with six points from three matches. Santos' side defeated Ghana and Uruguay before suffering a shocking defeat against South Korea. Now they will face Switzerland in their round of 16 game. In this article, we shall take a look if Cristiano Ronaldo will feature in the crucial round of 16 clash against Switzerland. Cristiano Ronaldo BENCHED for Portugal’s FIFA World Cup 2022 Round of 16 Match Against Switzerland

Cristiano Ronaldo had a decent start to the tournament. In the first game against Ghana, he converted a penalty as Portugal won the match by a margin of 3-1. In the next match, it seemed like Ronaldo has given Portugal the lead against Uruguay with a towering header. The goal however was later awarded to Bruno Fernandes. Then before the next match, there were questions about the fitness of the Portuguese superstar. Although it was thought that, he will be given a rest against South Korea, Ronaldo started the match. Unfortunately, it was his mistake that resulted in the equaliser for Korea. Ronaldo then had quite a few chances to redeem himself but failed to do so. As a result, Portugal tasted their first defeat in the FIFA World Cup 2022.

So far Cristiano Ronaldo has started all three group-stage matches for the Portugal team. The Portuguese captain, however, did not play the full 90 minutes in any of those games. There are no reports suggesting any kind of injuries right now. So naturally, the five-time Ballon d'Or winner is expected to start in the round of 16 match for Portugal against Switzerland. Adidas Confirm It Wasn’t Cristiano Ronaldo’s Goal During Portugal vs Uruguay FIFA World Cup 2022 Match

Switzerland has shown great resilience in the group stage and finished second behind Brazil on goal difference. The Swiss team is known for their strong mentality and brilliant defensive setup. They are coming with a big 3-2 win over Serbia. So ahead of this match, Ronaldo's availability is big news for the Portuguese side.

Although the 38-year-old forward is not having his best tournament, he still has the ability to change any game on any day. Fernando Santos will be hoping for the same when they take on Switzerland at the Lusail Iconic Stadium, Lusail at 12.30 am IST on December 07.

(The above story first appeared on LatestLY on Dec 06, 2022 11:56 AM IST. For more news and updates on politics, world, sports, entertainment and lifestyle, log on to our website latestly.com).