Some of the biggest competitions in the world – the European Championship and Copa America took place this year as sports continued its recovery from the COVID-19 era. Despite the year being an exciting one for fans around the globe, it also saw its fair share of controversies and we take a look at some of the biggest talking points in football in 2021 that rocked the world. 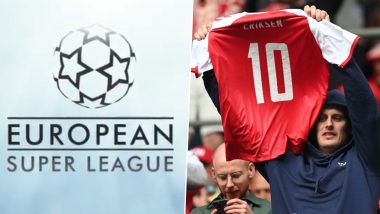 2021 is coming to an end and this year saw Sports return back to some sort of normalcy after a COVID-stricken era. Football once again played a huge role in the recovery of competitive sports on the world stage, hosting some of the biggest competitions in the world – the European Championship and Copa America. Despite the year being an exciting one for fans around the globe, it also saw its fair share of controversies and we take a look at some of the biggest talking points in football in 2021 that rocked the world.

The formation of the European Super League saw the football world divided as the new competition received a huge backlash from fans, players, managers, pundits and major governing bodies alike because of its format. The ESL was widely criticised due to it consisting of self-proclaimed super top teams from selected European countries. However, constant resistance from the majority of the footballing world and legal issues saw several clubs withdraw from the tournament which led to ESL suspending its operations.

Football teams being owned by wealthy businessmen is nothing new but Newcastle United’s recent takeover stirred a huge controversy. An association led by the Public Investment Fund, the sovereign wealth fund of Saudi Arabia, RB Sports & Media, and PCP Capital Partners completed the purchase of the Premier League club for £300m. With the Saudi-led fund holding an 80% stake in the club, several pundits, experts and fans alike criticized the move, stating that it was another example of ‘sports washing.’ However, despite the backlash, Premier League sanctioned the move.

England reached their first major competition final – UEFA Euro 2020 – since the 1966 World Cup win. However, the Three Lions were defeated by Italy on penalties where Jadon Sancho, Marcus Rashford and Bukayo Saka missed their kicks. Following this loss, the three players were targets of racist abuse on social media that once again brought up the underlying issue of racism in society. After the abuse, many fans and clubs came in support of the English footballers.

The footballing world was left shell-shocked after Denmark international Christian Eriksen collapsed on the football field due to a reported Cardiac Arrest against Finland. After a huge effort from Danish players and the medical staff, the midfielder was stabilized and then taken to the hospital for recovery.

Following this incident, Denmark were given choices of completing the game immediately or playing it the next day, or forfeiting the match after which the team finished the remaining 50 minutes. UEFA were slammed by many for their insensitiveness towards the delicate situation.

(The above story first appeared on LatestLY on Dec 17, 2021 12:42 PM IST. For more news and updates on politics, world, sports, entertainment and lifestyle, log on to our website latestly.com).