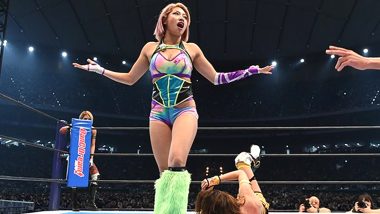 Japanese professional wrestler Hana Kimura, who starred in the latest season of Netflix reality series "Terrace House", has died at the age of 22. Stardom Wrestling, a promoter of women's wrestling in Japan, confirmed that the wrestler died on Saturday, reported Deadline. "Please be respectful and allow some time for things to process, and keep your thoughts and prayers with her family and friends," Stardom said in a tweet. No cause of death was given. The last post on Kimura's Instagram account depicted her and a cat, with the caption "goodbye". Balbir Singh Sr Dies at 95: Virat Kohli, Suresh Raina and Abhinav Bindra Lead Sports Fraternity’s Tribute to Late Hockey Legend.

She also tweeted an alarming message earlier on Friday. "I don't want to be a human anymore. It was a life I wanted to be loved. Thank you everyone, I love you. Bye." Recently, she had been subject to online bullying following an episode of "Terrace House" in which she fought with a fellow cast member over her wrestling uniform. In mid-April, Netflix suspended the production of the Japanese reality series "Terrace House" in the wake of the ongoing coronavirus pandemic. Gigi Simoni, Former Inter Milan Coach, Dies at 81.

To Hana Kimura and her family, I am so incredibly sorry for your loss. .. There are no words that could possibly heal this wound... Rest In Peace Hana Kimura... If anyone reading this is suffering, know there are… https://t.co/AvkdUG9QLN

The show follows three men and three women from different walks of life as they temporarily live together in a modernist house somewhere in Japan.

Kimura won her first title at the Japan Pro-Wrestling (JWP) Junior plate in 2016 and joined Stardom in 2019. She was a leader of the Tokyo Cyber Squad, a fan favourite in Japan. Her mother, Kyoko Kimura, was also a well-known wrestler. Members of the wrestling community such as Ronda Rousey expressed grief over Kimura's death on social media. "There are no messages that can heal this wound," Rousey tweeted.