Happy Birthday Omkar Singh: Lesser-Known Facts about the Indian Shooter As He Turns 36 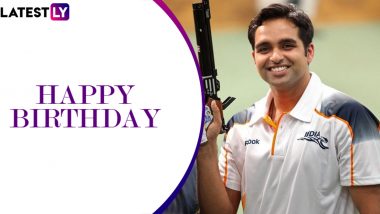 Indian shooter Omkar Singh celebrates his 36th birthday on Saturday (August 8, 2020). Hailing from Anuppur, Madhya Pradesh, Omkar is one of the finest shooters produced by India as he has made the nation proud on numerous occasions. The talismanic shooter won as many as three gold medals during the 2010 Commonwealth games and impressed one and all. With the help of his eagle eyes, firm grip and concentration, Omkar hit the bulls-eye more often than not. As of now, the shooter is serving the nation in the Indian army where he holds the rank of a Master Chief Petty Officer. IOC Sets New Qualification Deadline for Summer Games After Tokyo Olympics 2020 Postponement.

Winning an Olympic medal for India has always been a dream of Omkar Singh. On many occasions, the star shooter came close to winning a medal but never was able to cross the final hurdle. Determination has always been the biggest strength of Singh. After not being able to win the 10-meter pistol competition in 2010 Commonwealth games, the veteran made a sensational comeback in 2017 and clinched silver. As the talismanic shooter turns a year older, let’s look at some lesser-known facts about him. 2020 Tokyo Olympics New Dates: Summer Olympic Games Reportedly to Be Held From July 23, 2021.

(The above story first appeared on LatestLY on Aug 08, 2020 08:30 AM IST. For more news and updates on politics, world, sports, entertainment and lifestyle, log on to our website latestly.com).