India vs Pakistan Asia Cup 2022 Preview: Live Streaming and Telecast, Head to Head, Squads and Other Things You Need To Know Ahead of IND vs PAK Hockey Match

The subcontinental rivals would clash with each other once again in what is expected to be a fascinating encounter in Jakarta, Indonesia. Both teams have some new faces in their squad and it would be interesting to see who comes out in this evenly-matched contest. 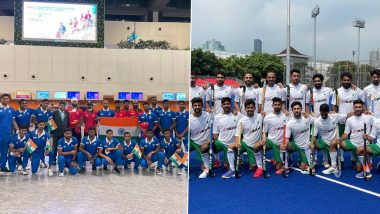 It's India vs Pakistan once again and this time, the battleground is the Asia Cup Hockey 2022. The Olympic bronze-medallists would be seen in action in one of the biggest tournaments of the sport and there surely could not have been a better way to start the competition than to face their archrivals in the very first game. The Indian team enter this competition as the defending champions of the competition, having won the last edition in 2017. But this time, they would field an 'A' side which would be guided by the experience of Birendra Lakra. Asia Cup Hockey 2022: Defending Champions India Leave for Jakarta

The Indian team too would have the services of veteran SV Sunil. Pakistan, like India, would have some new names in the squad too and it should make for a fantastic contest with the scales equally balanced between them. Both teams would be looking at this game and the tournament as a ground for preparation for the  Birmingham Commonwealth Games next month and the FIH World Cup in 2023.

A total of eight teams will compete in the competition. They have been divided into pools of four sides each. India, Pakistan, Japan and hosts Indonesia are in Pool A. Pool B has Malayasia, Bangladesh, South Korea and Oman.

India and Pakistan have squared off for a total of 177 times in total. Pakistan have an upper hand in this with 82 wins as compared to India's 64. 31 games have ended with both teams sharing spoils.

The key players for India in this clash would be skipper Birendra Lakra and vice-captain SV Sunil. Pakistan on the other hand, would rely on the performances of their skipper Umar Bhatta and Abdul Waheed.

Star Sports have acquired the broadcasting rights for the competition. Star Sports Select 2 would provide live telecast of the games in India. Fans can also watch live streaming of the games on the Disney+ Hotstar app.

(The above story first appeared on LatestLY on May 22, 2022 06:32 PM IST. For more news and updates on politics, world, sports, entertainment and lifestyle, log on to our website latestly.com).