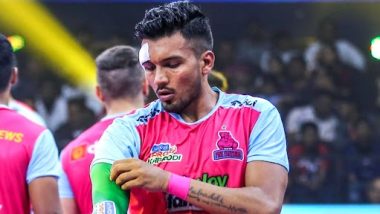 A look at the top raiders and defenders in Season 9.

Arjun Deshwal was the backbone of the Jaipur Pink Panthers' raiding unit throughout the vivo Pro Kabaddi League Season 9. He scored a whopping 296 raid points in 24 matches.

Bharat has been one of the biggest finds in the vivo Pro Kabaddi League Season 9. The raider took on the responsibility of leading the Bulls' raiding unit and helped his side win several close contests during the season. Bharat scored a total of 279 raid points during the course of the season.

Naveen Kumar had another brilliant season at the vivo Pro Kabaddi League, picking up 254 raid points in Season 9. Naveen also emerged as a terrific leader this season and guided his team to a Playoffs spot after a topsy turvy season for Delhi.

Ankush played his first season of vivo PKL this year, but he seamlessly led the charge for Jaipur's defense unit in Season 9. He played a vital role in his team's victorious campaign with 89 tackle points in the season.

Mohammadreza Shadloui Chiyaneh grew as a defender during the course of vivo Pro Kabaddi League Season 9. Chiyaneh, who scored 84 tackle points, registered the record for the most tackle points in one match (16 points) during the season.

While Bharat ensured that the Bulls picked up raid points successfully, Saurabh Nandal took on the raiders from the opposition. Nandal's 72 tackle points helped the Bulls register a semi-final finish in the Season 9.

(The above story first appeared on LatestLY on Dec 20, 2022 05:30 PM IST. For more news and updates on politics, world, sports, entertainment and lifestyle, log on to our website latestly.com).