Matt Riddle Believes Brock Lesnar Hates Him, ‘The Original Bro’ Reveals on ‘After The Bell’ Podcast 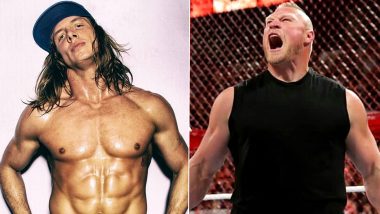 Matt Riddle who is currently signed with the SmackDown brand of WWE recently revealed in 'After The Bell' podcast that Brock Lesnar hates him. The Original Bro is a former NXT Tag Team Champion and he recently displayed a class performance against AJ Styles in the Intercontinental Match at SmackDown a few weeks back. Riddle apart from his wrestling skill has come under the spotlight after his comments on RAW Superstar Brock Lesnar. WWE Raw Aug 3, 2020 Results and Highlights: Seth Rollins to Face Dominik Mysterio at SummerSlam; Apollo Crews Defeats MVP to Retain United States Title.

Brock Lesnar had a bad opinion about Matt Riddle since Royal Rumble 2020, where he heard The Original Bro speaking about defeating Brock Lesnar and then force the Beast Incarnate to retire. Lesnar did not take this well, however, Riddle confirmed that he said this in a positive way, as every wrestler dream to have a piece of famous wrestler like Lesnar. WWE News: From Bray Wyatt Tweeting Interesting Quote to Randy Orton’s Son Completing High School Graduation, Here Are Five Interesting Updates to Watch Out For.

Meanwhile, Matt Riddle once again spoke about Brock Lesnar to Corey Graves at 'After The Bell' podcast where he once again mentioned that former WWE Champion has taken his comments as literal disrespect. Riddle ended this topic by stating that he will not bother much about what Brock Lesnar thinks about him and he will continue to move ahead in his career path by showing his mettle.

Matt Riddle after losing to AJ Styles in Intercontinental Title match was attacked by King Baron Corbin. His feud with Corbin is expected to be carried forward for a month or so before he is put into the title picture. In the last week's episode of SmackDown, Shorty G turned heel and delivered a suplex to Matt Riddle from behind. The former Olympian did this to get the ransom from King Baron Corbin.

(The above story first appeared on LatestLY on Aug 04, 2020 07:31 PM IST. For more news and updates on politics, world, sports, entertainment and lifestyle, log on to our website latestly.com).