NBA India Game 2019: Tickets for Basketball Match at Mumbai on October 5 to Go on Sale Today 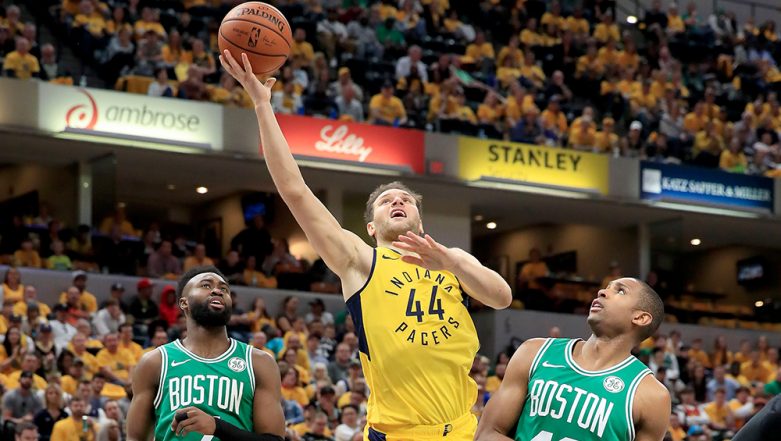 Mumbai, August 6: NBA India has announced that registration for tickets for the NBA India Game 2019, slated to be held on October 5, will go live from Tuesday at 12:00 p.m. IST and will run until Sunday, August 11. The NBA India Games 2019, which will feature the Sacramento Kings and Indiana Pacers playing two pre-season games on October 4 and October 5 at the Dome, NSCI, SVP Stadium in Mumbai, will mark the first games that teams from a North American sports league will play in India. Avengers Endgame Actor Don Cheadle Joins NBA Star LeBron James and Sonequa Martin-Green for Space Jam 2

"The league has been working very closely with the Sacramento Kings and Indiana Pacers to bring the authentic NBA experience to fans in India this October," said Diane Gotua, NBA India Managing Director."Our first-ever NBA games in India will celebrate the continued growth of basketball in India and the passionate fans across the country who support basketball and the NBA year-round," he added. NBA Finals 2019: Toronto Raptors Beats Golden State Warriors 114-110 to Win Their First NBA Title (Watch Videos)

Once registered, fans will have access to the court layout and pricing through an interactive 3D layout of the venue, giving them a 360-degree view and making them eligible to purchase tickets to the game when ticket sales go live on August 13. Fans can secure VIP experiences, including on-court photos and the opportunities to shoot free throws on the court, by visiting the BookMyShow app on iOS and Android and website with tickets priced Rs4,500 and up.