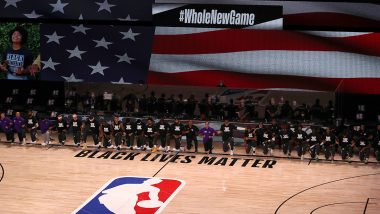 NBA resumed their season following the coronavirus enforced suspension on July 30, 2020 (Thursday) as Utah Jazz face New Orleans Pelicans while LA Lakers took on LA Clippers. The league was suspended in March due to the COVI-19 outbreak as several players tested positive for the virus. On the opening day of its restart, players and staff from all the participating teams took a knee in support of the Black Lives Matter Movement. England and West Indies Players Take a Knee in Support of Black Lives Matter Movement.

NBA re-launched its season with all 22 teams based in a bio-secure bubble at Disney World in Orlando, Florida. Ahead of their respective games, all the four teams who were scheduled to play on the day, kneeled during the American National Anthem to express their support and solidarity towards the BLM movement as people across the world are standing up against racial injustice. Indian Women’s Cricket Team Features in Nike’s ‘You Can’t Stop Us’ Campaign Which Portrays a Message of Unity.

Players went down on one knee and wore ‘Black Live Matter’ shirt as the American National Anthem was played before the game's start. Jon Batiste performed the national anthem in the Utah-New Orleans game while the Compton Kidz Club performed ‘Star-Spangled Banner’ in the Lakers-Clippers game.

The @LAClippers and @Lakers kneel in solidarity as the Compton Kidz Club performs the National Anthem. pic.twitter.com/1WImoaHBsQ

The @utahjazz and @PelicansNBA kneel in solidarity as @JonBatiste performs the National Anthem prior to the NBA Restart. pic.twitter.com/dQeHSbUx87

‘It's an opportunity to use this platform to spread a lot of positives, a lot of love throughout the course of the whole world,’ LeBron James said in a post-match interview. ‘We understand what's going on in society right now and we're using this NBA platform as players as coaches and as an organisation to stand strong on that. This is a good start.’ He added.

Speaking of the games, Utah Jazz defeated New Orleans Pelicans 106-104 with Rudy Gobert – who was tested positive for coronavirus – scoring first and last points of the game. Meanwhile, LeBron James led the Lakers to a 103-101 win over the Clippers.

(The above story first appeared on LatestLY on Jul 31, 2020 01:54 PM IST. For more news and updates on politics, world, sports, entertainment and lifestyle, log on to our website latestly.com).