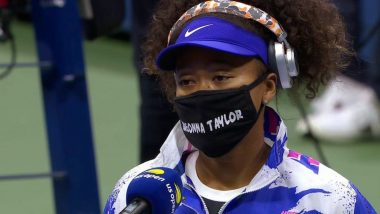 Naomi Osaka continued her protests against the shooting of late Breonna Taylor and offered support to the Black Live Matter movement after entering the stadium for her US Open 2020 first-round match wearing a Breonna Taylor mask. The 2018 US Open champion entered the Arthur Ashe stadium for her women’s singles first-round match against Misaki Doi wearing a black mask with Breonna Taylor’s name written on it. Taylor, a 26-year-old African-American woman, was fatally shot by the police on March 13 earlier this year while she was resting on her bed. Benoit Paire Tests Positive for COVID-19, to Withdraw From US Open: Report.

Osaka, who had also withdrawn from the Western & Southern Open semi-finals as a protest against racial injustice before turning on the decision, stepped into the Arthur Ashe stadium wearing the mask. She was praised online by netizens for her fight against police brutality and racial injustice in the United States.

.@naomiosaka walked out in a Breonna Taylor mask for her night match at Arthur Ashe stadium.#USOpen pic.twitter.com/Ubxwst54kl

The 22-year-old had earlier stated that she felt compelled to pull out of the tournament to bring the attention of the world to police brutality in the US. “I don’t expect anything drastic to happen with me not playing, but if I can get a conversation started in a majority white sport I consider that a step in the right direction,” Osaka had said in a statement on Twitter.

“Watching the continued genocide of Black people at the hand of the police is honestly making me sick to my stomach. I’m exhausted of having a new hashtag pop up every few days and I’m extremely tired of having this same conversation over and over again. When will it ever be enough?”

What a legend!! Arthur Ashe would be proud!

@naomiosaka to the world

Y’all, if you don’t stan @naomiosaka already, she just walked out on to one of tennis’ biggest courts (Arthur Ashe at the @usopen) wearing a #BreonnaTaylor mask! You better recognize greatness! ✊🏾✊🏾#BlackLivesMatter pic.twitter.com/WgfopEujGs

Love to see @naomiosaka walk out to tonight’s match with Breonna Taylor’s name across her mask. #SayHerName pic.twitter.com/goBtxccChB

She is one of the most quietest, soft spoken athletes out there and she has continuously been making the loudest, boldest statements. https://t.co/Ghxkg2JOPE

Breonna Taylor was an emergency medical technician who was shot dead by three Louisville Metro Police officers after they broke into her apartment executing a no-knock search warrant. Taylor, who was resting on her bed, was shot eight times and died at the scene. Her death sparked a wide outrage over the shooting of black people in the US.

Meanwhile, the US Open 2020 began on August 31 without any spectators and inside a closed stadium. The COVID-19 pandemic has already seen many athletes, including Rafael Nadal, Simona Halep, Ashleigh Barty and Nick Kyrgios, withdraw from the tournament citing fear of safety and lack of proper travel.

(The above story first appeared on LatestLY on Sep 01, 2020 09:17 AM IST. For more news and updates on politics, world, sports, entertainment and lifestyle, log on to our website latestly.com).