Nick Kyrgios has been charged with the allegations that he used to physically assault his ex-gf Passari when the couple were in a relationship. The Australian tennis player has been summoned by Canberra Court in August for the case's hearing. 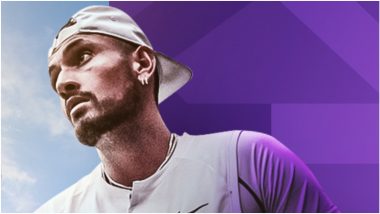 Nick Kyrgios is expected to play his quarter-final clash on Wednesday, July 8 as scheduled despite being charged with allegations of physical assault on his former girlfriend Chiara Passari, an All England Club's spokesperson said On Tuesday. The Australian tennis player has been charged with the allegations that he used to physically assault his ex-gf Passari when the couple were in a relationship till 2021. Kyrgios, who introduced his Australian girlfriend to the world by posting an Instagram story with their photo, is due to face a court hearing in Canberra in the month of August. Nick Kyrgios Charged With Assaulting Ex-Girlfriend Chiara Passari Ahead of Wimbledon 2022 Quarterfinal Clash, Summoned to Canberra Court

The 27-year-old tennis star, who has been fined for two times in this ongoing Wimbledon for his offensive behaviours in the field, is due to face Cristian Garin in the quarter-finals of the Championships on July 8. Since 2015, it is the first time the Aussie has reached the last eight of any major tournament.

However, the tennis player, who is constantly criticised for his poor sportsmanship and misconduct on the turf, has been hit by the assault allegations before one of the important matches in his career. His lawyer has opined that his client will be present at the Canberra Court, despite saying that the charge is related to a domestic issue and has no connection with physical violence. Novak Djokovic Comes up With 'Unique Bird Celebration' As he Makes it to Wimbledon 2022 Semifinal, Says ‘Wings Activated’

Meanwhile, the Wimbled committee have given their decisions on the charges Kyrgios have faced and the player's pending court hearing. While addressing the press, an All England Club spokesperson said:  “We have been made aware of legal proceedings involving Nick Kyrgios in Australia, and as they are ongoing, we are not in a position to offer a comment.

“We are in touch with Nick’s team and he remains scheduled to play his quarter-final match tomorrow," he concluded.

It is understood that Kyrgios will definitely play in the quarter-finals of Wimbledon 2022. If he manages to overcome Cristian Garin challenge, he will face the winner of Rafael Nadal-Taylor Fritz game in the semi-finals. The 27-year-old, who has been ordered to appear in Canberra Court in August, might face a jail-time of two years if the allegations against him are found to be true. It remains to be seen what kind of future is awaiting one of the most controversial sportsperson at recent times.

(The above story first appeared on LatestLY on Jul 06, 2022 09:35 AM IST. For more news and updates on politics, world, sports, entertainment and lifestyle, log on to our website latestly.com).