Wimbledon 2022: Sania Mirza And Mate Pavic Move Into Second Round of Mixed Doubles

Six-time Grand Slam winner Sania Mirza and Mate Pavic, one-half of the reigning men's doubles Wimbledon champions, faced stiff resistance from their opponents but managed to break them in the eighth game. 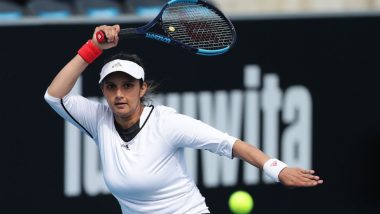 London, July 2 : Indian tennis ace Sania Mirza and her Croatian partner Mate Pavic moved into the second round of the Wimbledon 2022 mixed doubles event, here on Friday. Sania and Pavic, seeded sixth, beat the unseeded pair of Georgia's Natela Dzalamidze and Spain's David Vega Hernandez 6-4, 3-6, 6(10)-6(3) in one hour and 58 minutes.  Wimbledon 2022: Novak Djokovic Storms Past Miomir Kecmanovic With His 35th Centre Court Win in a Row, Reaches Round Of 16

Six-time Grand Slam winner Sania and Pavic, one-half of the reigning men's doubles Wimbledon champions, faced stiff resistance from their opponents but managed to break them in the eighth game.

From thereon, the Indian and her Croatian partner Pavic, also a Tokyo 2020 gold medallist, kept their cool to take the lead. The second set saw a closely fought contest in the early stages. However, Dzalamidze and Hernandez broke Sania's serve in the seventh game and rode the momentum to draw level.

Both teams produced their best game in the deciding set and put up an entertaining spectacle. In the tenth game, the Indo-Croatian pair were on the verge of winning the match but their opponents saved four match points in the longest game of the contest.

Sania and Pavic stepped up their game in the super tiebreaker and raced to a healthy lead and eventually sealed their spot in the next round. The 35-year-old Sania, who is playing her last season of professional tennis, is playing in her final Wimbledon tournament. Earlier, she was eliminated in the first round of the women's doubles event on Wednesday.

(The above story first appeared on LatestLY on Jul 02, 2022 09:52 AM IST. For more news and updates on politics, world, sports, entertainment and lifestyle, log on to our website latestly.com).