'The Rock' Dwayne Johnson Retires From WWE: Relive Five Best Matches of The Wrestling Legend From The Ring (Watch Videos) 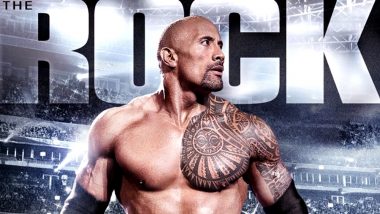 Dwayne Johnson, better known by the ring name of The Rock officially retired from WWE. The People's Champion revealed this in a chat show Live with Kelly and Ryan in the States,  The Rock was last involved in a famous feud with John Cena at WrestleMania 29. However, his last official match was against Erick Rowan at WrestleMania 32 which he won in six seconds. As The Rock bids farewell to WWE, let us explore the 5 best matches from his career. WWE Raw Aug 5, 2019 Results and Highlights: Goldberg to Face Dolph Ziggler at SummerSlam; Alexa Bliss and Nikki Cross Become New Women's Tag Team Champion (Watch Videos)

The fans of The Rock will no longer be able to hear 'If you smell, what The Rock is cooking'. Dwayne Johnson made his debut in WWE in the year 1997 at Survivor Series PPV at Madison Square Garden. He is the son of Hall of Famer Rocky Johnson. Dwayne ruled the attitude era of WWE where his rivalry with 'Stone Cold' Steve Austin and Triple H would never be forgotten. He has won several championships, being a two-time Intercontinental Champion, a five-time tag team champion and a ten-time world champion. Dwayne ‘The Rock’ Johnson’s Workout, Fitness and Diet Plan: How the Former WWE Wrestler Keeps in Shape (Watch Videos)

5 Best Matches of The Rock

The Rock might have lost this match due to interference from Mr.McMahon, however, he put up a good show and the crowds were on their seat. Austin won this match to become the new World Champion.

2. The Rock vs Hulk Hogan, WrestleMania 18

The Rock won this match and both legendary superstars fought their heart out. This match will always be remembered by wrestling fan.

Iron man match involves 60 minutes of the fight and the superstar with the most number of victories during that duration of time wins the match. Both superstars The Rock and Triple H did a good job of holding the crowd for full sixty minutes. Even The Undertaker interfered in this match to rescue The Rock from the attack of DX. However, with the help from special guest referee Shawn Michaels, Triple H came out victorious.

4. The Rock vs The Undertaker vs Kurt Angle, Triple-Threat Match For Undisputed Championship, WWE Vengeance 2002

The Rock pinned Kurt Angle to win this match. However, this match had put fans on the edge of their seat. It was indeed one of the greatest battles in the history of WWE.

5. The Rock vs John Cena, WrestleMania 28

The Rock delivered a rock bottom to John Cena to win this epic battle. This match will last in the memory of WWE fans for ages.

The Rock must have announced retirement from WWE, however, he admitted on a chat show Live with Kelly and Ryan in the States that he does not rule out a comeback. However, he added to his statement that he has accomplished a lot in his wrestling career. As a WWE fan, we would want The Rock to make an appearance on a few occasion at Raw or SmackDown.

(The above story first appeared on LatestLY on Aug 06, 2019 11:53 AM IST. For more news and updates on politics, world, sports, entertainment and lifestyle, log on to our website latestly.com).

Comments
Tags:
5 Best Matches of The Rock Dwayne Johnson Live with Kelly and Ryan in the States The Rock The Rock Retirement The Rock Retires from WWE World Wrestling Entertainment (WWE)
Comments
You might also like