Tokyo Olympics 2020: A Look at India’s Gold Medallists in the Olympic Games

India have medals hard to come by at the Olympics, winning only 28 medals out of which nine gold medals, seven silver and 12 bronze. Abhinav Bindra is so far, the only individual gold medal winner for India. 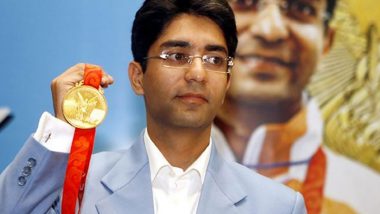 It is almost time that the Tokyo Olympics kick starts on July 23 and top athletes from all over the world would compete against each other in a variety of sporting events. India too would be sending 120 participants- which comprises of 67 men and 53 women athletes, this time to Tokyo--the largest contingent from the country to go to the Olympics and this time, just this time, there are hopes that the country would be able to put its disappointing show in Rio behind and fetch more accolades for the country. 2016 Rio Olympics Recap: A Look At Indian Athletes' Performances At the Last Summer Games

India so far, have been able to win just 28 medals in its history of participation in the Olympics for over 100 years. Gold medals per se, has become rare too and in this article, we shall take a look at the athletes who won gold for India in the grandest stage:

1) Abhinav Bindra: Abhinav Bindra to date, remains the only Indian to win an individual gold medal at the Olympics. Bindra achieved this feat in the 2008 Beijing Olympics, where he won the top prize in the 10m Air Rifle event.

2) The Golden era in Indian hockey: India's team gold at the Olympics have come through its hockey players, who have time and again dominated the sport at the global level from 1928-1980. It all started with Jaipal Singh's team in 1928, who defeated Netherlands in the final to win the gold medal. Captains like Lal Bokhari, Kishan Lal and the legendary Dhyan Chand continued the tradition of winning gold medals in the Olympics. Lal's team won the first goal for India in hockey after independence. The last hockey gold for India came in 1980, Moscow Olympics.

Indian athletes would be raring to give their best in order to bring glory to the national flag at the Tokyo Olympics. They would sincerely hope that when it all gets over, there are more additions to that list.

(The above story first appeared on LatestLY on Jul 08, 2021 10:59 PM IST. For more news and updates on politics, world, sports, entertainment and lifestyle, log on to our website latestly.com).