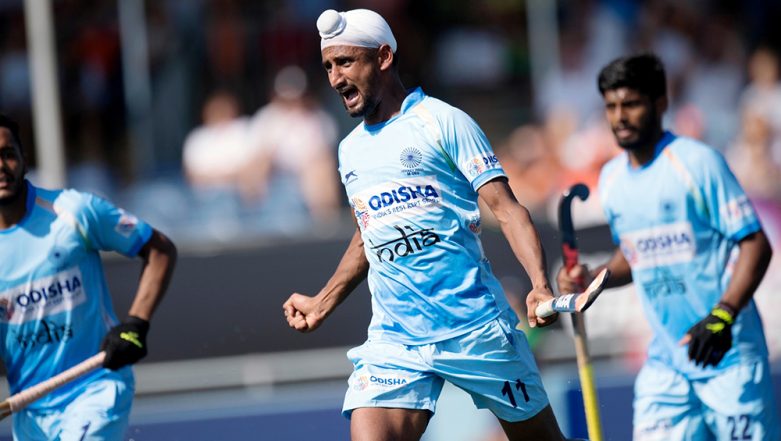 Bengaluru, August 8: Mandeep Singh, vice-captain of the Indian men's hockey team, has insisted that they are leaving no stone unturned in their preparations for the upcoming Olympic Test Event to be held in Tokyo. The Indian team, currently ranked world no. 5 in the FIH Rankings, will be the top-ranked team taking part in the competition, and Singh believes that the younger players in the squad are ready to step-up in order to help the team win the tournament. Tokyo Olympics 2020: Indian Women’s Hockey Squad Announced for the Test Event.

With some senior players like P.R. Sreejesh, Manpreet Singh, Birendra Lakra, Akashdeep Singh and Ramandeep Singh being rested for the tournament, defender and drag-flicker Harmanpreet Singh has been given the captaincy of the team, while forward Mandeep Singh will be his deputy. 24-year-old Singh is one the most experienced players in the team, with only veterans S.V. Sunil and Kothajit Singh Khadangbam having won more international caps than the forward player. Tokyo Olympics 2020: Dipa Karmakar Fighting Time to Be Fit for the Tournament, Says Coach Bisweswar Nandi.

"We are going to play Malaysia, Japan and New Zealand in the Olympic Test Event, and these teams have great quality in all departments. On the other hand, our team has a lot of younger players with two debutants as well, along with players who will be looking to prove a point as we progress towards next year's Olympic Games," said Singh."The Test Event will give us good exposure of how the conditions are in Tokyo, and playing there will also motivate us even further to secure a position at next year's quadrennial event," he added. Speaking about the vice-captaincy role, Singh said: "It is definitely a new challenge for me personally to be given more responsibility in the form of the vice-captaincy of the Indian team.

I take pride in playing for the nation, and to be able to get more responsibility, I feel it motivates me even further to bring more success to the country in the upcoming tournament."India are scheduled to play three round-robin matches in the competition between August 17-20 against Malaysia, New Zealand and Japan, which will see the top-two sides compete in the final match on August 21.