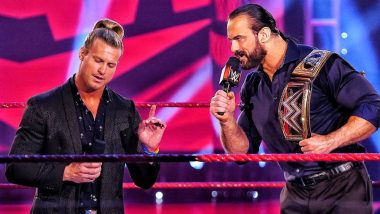 WWE Raw June 22, 2020, took place at Performance Centre in Orlando, Florida. The show kicked off with Dolph Ziggler, as he has been traded to Raw from SmackDown brand. Heel Ziggler immediately meant business on Monday Night Raw as he challenged Drew McIntyre for a title match at WWE Extreme Rules. The Scottish Psychopath without any hesitant accepted his challenge for WWE Championship match. Apart from this, we saw Big Show confronts Randy Orton and Ric Flair. Lot more exciting stuff we have to share from this week's Raw, scroll down for details. WWE Raw June 15, 2020 Results and Highlights: Randy Orton Defeats Christian in ‘Unsanctioned Match’; Seth Rollins Gets Attacked By Dominik (View Pics)

Sasha Banks and Bayley successfully defended their Tag Team titles against The IIConics. The female duo took yet another step ahead to prove they are the most dominant force in female wrestling division. The Legit Boss even went on to challenge Asuka for Women's title match, which Raw Women's Champion accepted happily. However, soon after her acceptance, she was assaulted by Bayley and Asuka. Speaking about Asuka's title defence, she defeated Charlotte Flair by submission in this week's Monday Night Raw episode. It must be noted that the damaged was done to The Queen prior to the match by Nia Jax, where Flair arm was injured. The Undertaker Announces Retirement: From Failing to Become WWE Grand Slam Champion to Choking Kurt Angle Almost to Death, Here Are 5 Lesser-Known Facts About The Deadman.

Now let's come to the feud between Seth Rollins and Rey Mysterio. Monday Night Messiah almost made the sacrifice of Dominik Mysterio, however, he was rescued at the right time by Rey Mysterio, Aleister Black and Humberto Carrillo. Mysterio and his supporters successfully came over Monday Night Messiah and his disciples. It will be interesting to see how the storyline between these wrestlers builds up in the coming weeks. We saw Big Show confronts Randy Orton and Ric Flair, when Flair was boasting Orton's power of being a legend killer and how he took out Christian last week by punt kick. Big Show challenges Orton to step against him, however, both Flair and Orton left the ring without answering him. We saw Edge connecting his fans via video, The Rated-R sounded like a wounded tiger as he said that Orton has woken up the evil side of him and he will go beyond the limit to take out Orton soon. However, Edge is still injured and his torn triceps will take time to heal, fans will have to wait for some time for his return. Roman Reigns Cried After His Match Against The Undertaker at WrestleMania 33, The Big Dog Reveals in an Interview!

Rey Mysterio Gets Upper Hand Over Seth Rollins & His Disciples

Sasha Banks & Bayley Have All Reasons to Smile

@niajaxwwe isn’t letting @charlottewwe get in the way of her title aspirations... also @ronkillings1 needs to watch out for #Ninjas 👀#WWERaw

"You woke up the side of me that will sink to ANY level to get what he wants."

(The above story first appeared on LatestLY on Jun 23, 2020 01:56 PM IST. For more news and updates on politics, world, sports, entertainment and lifestyle, log on to our website latestly.com).