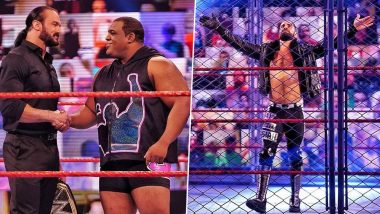 WWE Raw September 14, 2020 episode left no stone unturned to keep fans alive throughout the show. We witnessed an amazing battle between Seth Rollins and Dominik Mysterio in a steel cage match. Dominik did put up a good fight, however, he was brutally defeated by Monday Night Messiah in front of his family. Apart from this, we saw Keith Lee confronts WWE Champion Drew McIntyre for interfering in his match last week against Randy Orton. The two friends fought each other in the main event match however it ended in a no-contest due to the interference by Retribution. Meanwhile, you have arrived at the right platform, if you are looking for WWE Raw Sept 14, 2020 results and highlights. WWE Raw Sept 7, 2020 Results and Highlights: Drew McIntyre Takes Down Randy Orton With Claymore Kick, Dominik Mysterio Defeats Buddy Murphy to Register His First Singles Victory (View Pics)

Seth Rollins after defeating Dominik Mysterio in steel cage match walked out of the cage with kendo sticks in his hand and then hugged Buddy Murphy. All of a sudden, Rollins then crashed Murphy on the doors of the cage and started to assault him. The crowd then started booing Rollins. Seth Rollins then even went on to insult Seth Rollin's wife and daughter. Speaking about Drew McIntyre vs Keith Lee match, it ended in no contest as Retribution interfered, which was then followed by the entrance of The Hurt Bussiness. There was chaos outside the ring, however, McIntyre and Lee took them out later and stood tall staring each other.

Speaking about women's division, Asuka defeated Mickie James in Raw Women's title match and was later confronted by Zelina Vega. We then saw The Riot Squad defeat Lana and Natalya in a tag team match. We saw Braun Strowman making his appearance at Raw Underground. Also, Mandy Rose has been drafted to Raw. Now let us take a look at some videos and pictures from this past week Raw.

From the top of the cage all the way to the canvas! #WWERaw @wwerollins @dominik_35

The Retribution & The Hurt Business Collide

#TheHurtBusiness took care of business as they fought off #RETRIBUTION! @realkeithlee and @dmcintyrewwe will have to finish this another time! #WWERaw

Randy Orton was taken out last week by Drew McIntyre with three claymore kicks. We can expect The Viper to return soon in coming weeks before he heads to Clash of Champions 2020 to face The Scottish Psychopath for WWE Championship. Stay tuned with LatestLY for more updates and news from WWE.

(The above story first appeared on LatestLY on Sep 15, 2020 12:05 PM IST. For more news and updates on politics, world, sports, entertainment and lifestyle, log on to our website latestly.com).