We just witnessed an extravagant episode of WWE SmackDown where the script is perfectly set for the upcoming major pay per view event WrestleMania 36. We are just a night away from WrestleMania 36 which is the flagship event of WWE. 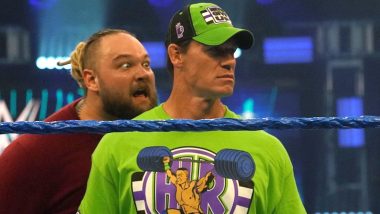 Due to the coronavirus outbreak, many sporting events have been cancelled as a precautionary measure to fight against COVID-19 germs. However, WWE continues to go with WrestleMania 36 without any delay. However, they made major changes in the plan, initially, WrestleMania 36, was supposed to take place at Reymond James Stadium, Tampa, Florida on April 5, 2020. However, due to coronavirus pandemic situation now WrestleMania 36 will take place behind closed doors on April 4 and 5 at WWE Performance Center in Orlando, Florida.

WWE also revealed that Goldberg will defend his Universal title against Braun Strowman, this weekend at WrestleMania 36. Roman Reigns was scripted as WWE plan to be Goldberg's opponent at WrestleMania 36, however, The Big Dog just recovered from leukemia a year back. As a preventive measure, WWE took the decision at the last moment to go with Braun Strowman as Goldberg's opponent. It must be noted that Roman Reigns is immunocompromised, putting him at greater risk if he contracts COVID-19.

Apart from these things, we witnessed Daniel Bryan and Shinsuke Nakamura match end in disqualification. Sami Zayn will defend his Intercontinental title against Bryan at WrestleMania 36. Daniel Bryan earned this spot thanks to Drew Gulak, who defeated Nakamura last week on SmackDown which grants Bryan a shot at Sami Zayn's Intercontinental champion. We also saw SmackDown Tag Team Champion The Miz and John Morrison address The Usos and The New Day, their WrestleMania 36 opponents. Miz and Morrison said that Usos and New Day will destroy each other, while The A-Lister and The Shaman of Sexy will climb up the ladder.

BREAKING: @goldberg95 defends the #UniversalTitle against #BraunStrowman THIS WEEKEND at #WrestleMania!

Now we will have to just sit back and eagerly wait for a matter of few hours to see action-packed matches with WWE has planned for its viewers worldwide. Apart from WrestleMania 36 taking place at Performance Center, the telecast will also take place at other multiple locations. WWE fans indeed have some treats ready for them during this lockdown period that too for two days in a row. Matches from Raw brand like Brock Lesnar vs Drew McIntyre, The Undertaker vs AJ Styles, Becky Lynch vs Shayna Baszler, Edge vs Randy Orton to name a few are other exciting matches to watch out for at the Show of Shows.

(The above story first appeared on LatestLY on Apr 04, 2020 02:27 PM IST. For more news and updates on politics, world, sports, entertainment and lifestyle, log on to our website latestly.com).